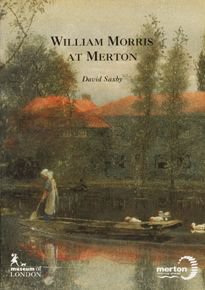 I must express my gratitude to Dave Saxby for sending me a copy of his book William Morris at Merton.  Written in 1995, William Morris at Merton won the best library book in Britain and an award from the John Bull prize for literature.  Copies can be purchased at the Museum of London.  I’m always interested in the works of William Morris, but learning about Merton Priory was even more fascinating than I had anticipated.  The Merton Priory website offers a glimpse into the historical significance of the site.

In 1881, William Morris chose Merton as the new headquarters for Morris & Co.  It was an ideal location that provided ample room for looms and the close proximity to the river was perfect for vegetable dying.  William de Morgan also leased land at Merton Abbey for his Fine Art Pottery.

William Morris at Merton is a short book, but don’t allow its length to deter you.  In 24 pages, Saxby shares Merton Abbey’s history as well as detailed explanations of the manufacturing process Morris used  including dyeing, block printing, stained glass, and weaving.  I was particularly interested in the dyeing process and enjoyed this description that Saxby shares from A brief sketch of the Morris Movement (1911):

“The cotton cloth is first dyed to a uniform dark shade of blue in one of the large indigo vats, and is printed with a bleaching reagent which either reduces or removes the blue colour as required by the design.  Mordants are then printed on the white parts, where red has to come, and the whole cloth is dyed a second time with madder.  The process is repeated a third time for yellow, the three colours being superimposed on each other to give green, purple, or orange.  All loose colouring matter is then cleared away, and the colours are set by passing the fabric through soap at almost boiling heat.  The final treatment is to spread the cloth on the grass with its printed face to the light, so that the whites may be purified and all fugitive colour removed in nature’s own way.  The process is called ‘crofting’, and the meadows round the works in fine weather are bright and gay with long strips of many-coloured material stretched upon the buttercups and daisies.”

In the 18th century two calico printing works were established within the former precinct walls of the priory. In 1881 the Merton High Street works became the workshops of William Morris and in 1904 the Merton Abbey works were taken over by Liberty & Co.

The chapter house is open to the public two or three times a year. Here we have artefacts from Merton Priory, displays, block printing demonstrations, children’s archaeology dig boxes and craft activities.

2 thoughts on “William Morris at Merton”