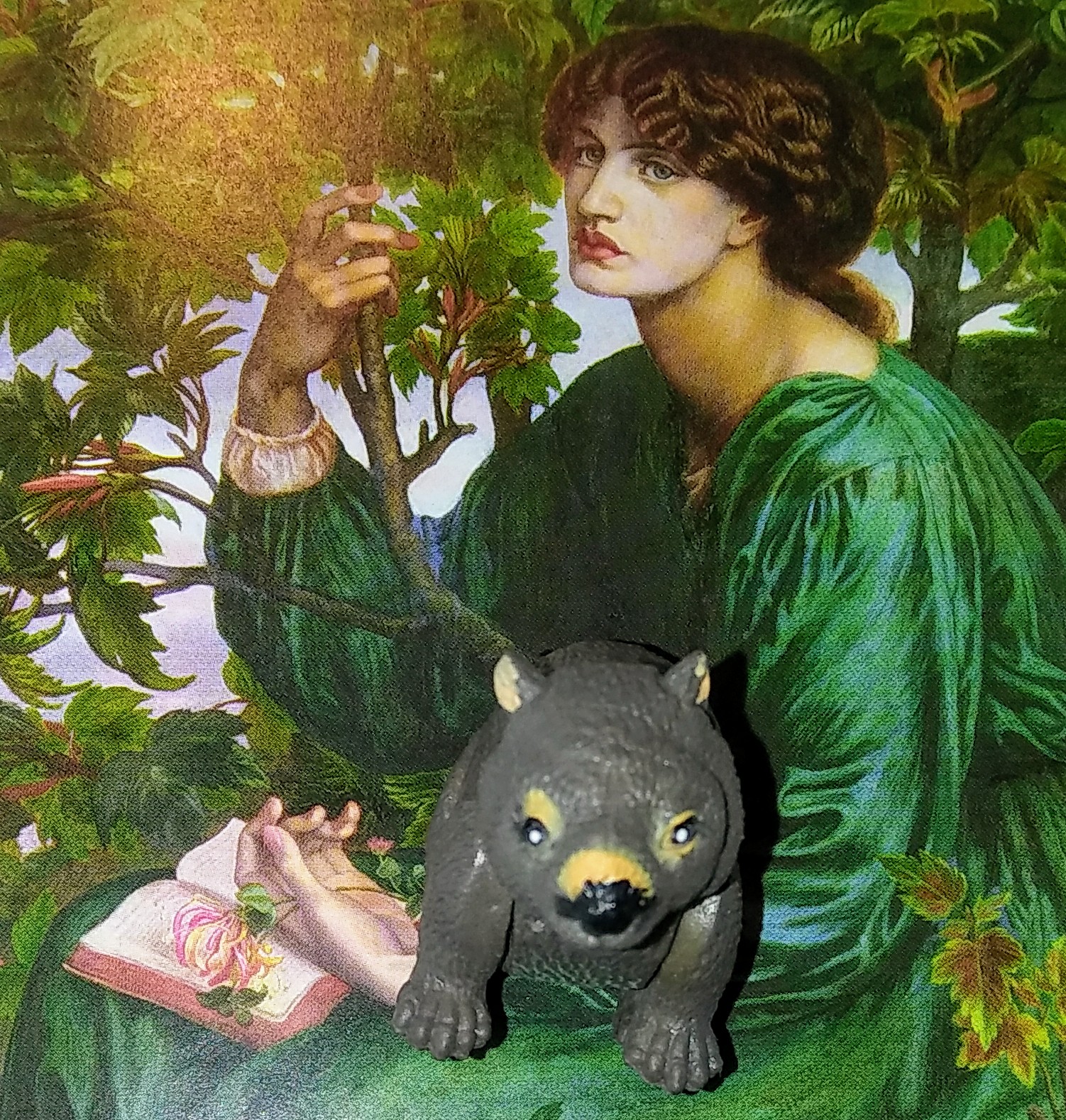 Thaddeus Fern Diogenes Wombat has been poring over Rossetti paintings in order to be the best Pre-Raphaelite Sisterhood assistant he can be.  He’s quite drawn to all the sumptuous green frequently found in DGR’s paintings.  While he is interested in almost all Rossetti works, it is the images of Jane Morris he finds particularly captivating today. (T-Dub is smitten.)

One of Dante Gabriel Rossetti’s last paintings shows Jane Morris in a world of green.  She’s surrounded by foliage, seemingly lost in a day dream while her book lies ignored on her lap.  Her hand loosely holds a honeysuckle.

Jane is  clad in a similar dress to the one she wore in Proserpine, where she is again seen both wearing and surrounded by green. Another green garment can also be seen in Astarte Syriaca, although it is more loosely draped and her bare shoulders are exposed.  All that verdant, lush drapery is something I associate with Jane thanks to Rossetti’s works.  Her creamy dark-haired beauty is cemented in my mind as something best complemented by emerald hues.  I see her as a malachite goddess, a viridian queen.  (You might like my post about Jane and unconventional beauty.)

Rossetti wrote a sonnet to accompany The Day Dream.  The poem ends  She dreams ; till now on her forgotten book/Drops the forgotten blossom from her hand.  The poem and picture are obviously about the woman lost in her day dream, but Rossetti’s obsessive use of Jane Morris in his paintings makes me question whether or not the title refers to Jane as the subject of his own daily thoughts and dreams. Perhaps the painting is not of a woman day dreaming, but showing us the fixation of the artist’s own daytime musings. To paraphrase his sister Christina Rossetti’s poem, perhaps we see Jane here not as she is, but as she fills his dream. (In an Artists’s Studio).

In the study for The Day Dream, we can focus on Jane’s face.  This is the face that captivated Rossetti from the moment he spotted her in the theatre audience in Oxford, the face that has, for many,  become representative of Rossetti’s body of work.

“How nice it would be if I could feel sure I had painted you once and for all so as to let the world know what you were, but every new thing I do from you is a disappointment, and it is only at some odd moment when I cannot set about it that I see by a flash the way it ought to be done,” Rossetti wrote to Jane. She was an important part of Rossetti’s later years and each painting can be seen as an attempt to capture some inexplicable quality that is the key to their relationship.  Perhaps each work is a different “day dream”, if we look at day dreams as a way to explore our subconscious. This article, What Your Daydreams Reveal About You, discusses day dreams as a way to understand ourselves, set goals and improve our lives.  Seen in this psychological context, the title of Rossetti’s painting takes on a deeper meaning. Jane Morris, as Rossetti’s muse, became the catalyst for “day dreams” that inspired some of his greatest masterpieces.  Through his work, he may not have been exploring not only Jane’s face, but what she meant to him and why.

The thronged boughs of the shadowy sycamore
Still bear young leaflets half the summer through;
From when the robin ‘gainst the unhidden blue
Perched dark, till now, deep in the leafy core,
The embowered throstle’s urgent wood-notes soar
Through summer silence. Still the leaves come new;
Yet never rosy-sheathed as those which drew
Their spiral tongues from spring-buds heretofore.
Within the branching shade of Reverie
Dreams even may spring till autumn; yet none be
Like woman’s budding day-dream spirit-fann’d.
Lo! tow’rd deep skies, not deeper than her look,
She dreams; till now on her forgotten book
Drops the forgotten blossom from her hand.