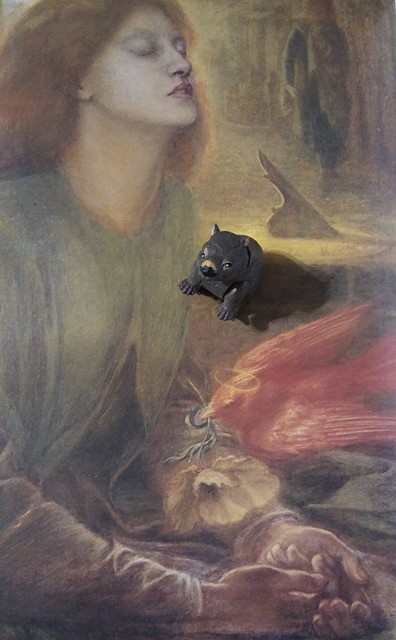 You all know T-Dub is a worthy assistant here in my Pre-Raphaelite hood (Get it? Sisterhood? Hood?  Okay, I’ll move on.) I recently wrote about Rebecca Solomon’s painting The Wounded Dove and the meaning and symbolism of doves has been on my mind lately.  This gives me the perfect opportunity to teach my faithful wombat about Dante Gabriel Rossetti’s “dove,” Elizabeth Siddal.

“Dove” was one of Rossetti’s pet names for Lizzie, who became a model for several Pre-Raphaelite artists when she was discovered by Walter Deverell in 1849. She famously (and dangerously) posed as Ophelia in the 1854 painting by Sir John Everett Millais. Rossetti encouraged her development in art and the pair eventually married in 1860.

In a Valentine poem written for her, he calls her “dear dove divine.” He often drew a dove as a hieroglyph to represent her in letters. In one letter to his sister, poet Christina Rossetti, he mentions a black silk dress Lizzie had recently made for herself and calls her a “rara avis in terra,” quoting the Satires of the classical Roman poet Juvenal, who wrote of “a rare bird in the lands, and very like a black swan.”

In 1862, Lizzie died of an overdose of laudanum.  Her memory continued to haunt Rossetti for years and eventually he was plagued by health and mental problems. A chaffinch landed on his hand while visiting poet William Bell Scott.  Scott was apparently perplexed when Rossetti shared his belief that Lizzie’s spirit had migrated into the bird.  Did Rossetti really believe that souls migrate into birds after death? Or was this a new notion, brought on by the stress of his ill health?  At the time of this visit to Scott, Charles Augustus Howell (known as the worst man in London) was determining what steps were necessary to have Lizzie’s body exhumed in order to retrieve Rossetti’s poems. Perhaps viewing the bird as Lizzie allowed him to see her disinterment as not disturbing her in any way, as her soul was now flying free in the chaffinch.

Rossetti memorialized her in his painting Beata Beatrix, a tribute to Lizzie that incorporates a poppy flower being delivered to her hands by a dove.  Opium is derived from poppies; the dove delivers to her the very source of the ingredient that killed her.

There is more than one version of the work.  A dove appears in each, usually red but it is white in one depiction. 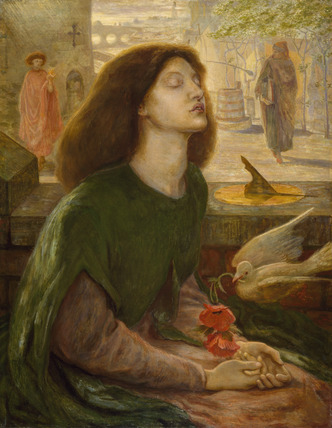 Although there are noticeable changes from work to work, the composition of Beata Beatrix remains the same.  Elizabeth Siddal appears as Beatrice, Dante Alighieri’s love and guide in La Vita Nuova. In the background we see the figure of Alighieri and the allegorical figure of Love. And then there’s that dove, a bird that usually symbolizes peace and holiness, yet in this work it also the messenger of death.  Perhaps Rossetti envisioned the dove delivering peace to Siddal, the peace she found in laudanum and the peace she would hopefully find in the afterlife.

Rossetti associated Lizzie with doves in a way that was sweet and romantic during their relationship and became incredibly sad and morbid in Beata Beatrix.  Instead of ending on such a sad note, I’d like to share his Valentine poem to Lizzie, his “dear dove divine.”  Written in 1855, it is a delightful and somewhat humorous poem and I can feel the love behind it as I read it.

Yesterday was St. Valentine.
Thought you at all, dear dove divine,
Upon the beard in sorry trim
And rueful countenance of him,
That Orson who’s your valentine?
He daubed, you know, as usual.
The stick would slip, then brush would
fall:
Yet daubed he till the lamplighter
Set those two seedy flames astir;
But growled all day at slow St. Paul.
The bore was heard ere noon; the dun
Was at the door by half-past one:
At least ’tis thought so, but the clock-
No Lizzy there to help its stroke-
Struck work before the day begun.
At length he saw St. Paul’s bright orb
Flash back  the serried tide absorb
That burning West which it sucked up
Like wine poured in a water-cup;
And one more twilight toned his daub.
Some time over the fire he sat,
So lonely that he missed his cat;
Then wildly rushed to dine on tick-
Nine minutes swearing for his stick,
And thirteen minutes for his hat.
And now another day is gone:
Once more that intellectual one
Desists from high minded pursuits,
And hungry, staring at his boots,
Has not the strength to pull them on.
Come back, dear Liz, and, looking wise
In that arm-chair which suits your size,
Through some fresh drawing scrape a hole.
Your Valentine and Orson’s soul
Is sad for those two friendly eyes.