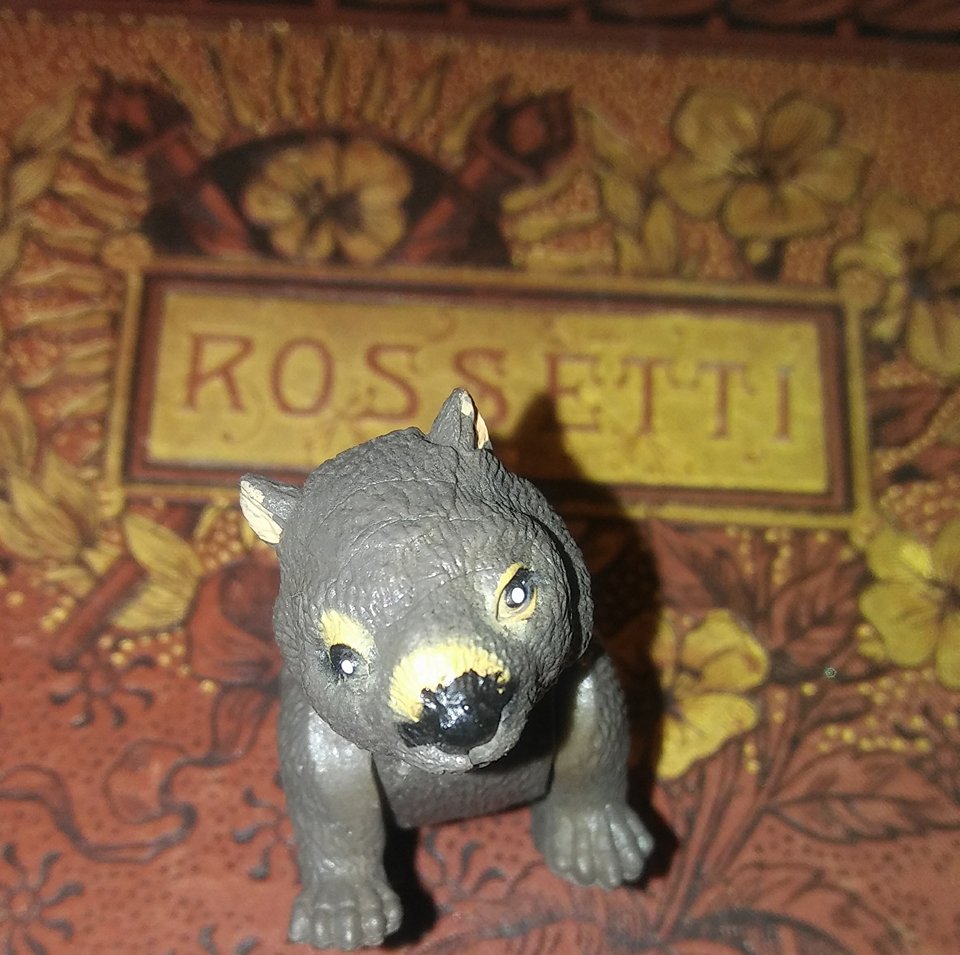 T-Dub knows all about Rossetti’s wombats, but today I thought he might like to learn about the rest of the exotic menagerie of animals the artist assembled.  I felt that William Michael Rossetti’s description of his brother’s pets would be the best introduction. It is quite lengthy for the purposes of a blog post, so I will post it in two parts, to be continued on next week’s Wombat Friday.

“It has often been stated that my brother, at Cheyne Walk, kept from time to time a large number of animals.  This is entirely true.  Being fond of “beasts”, and having a large garden, with plenty of space for accommodating them either in the open  or in corners partitioned off, he freely indulged in his taste.  He had no particular liking for an animal on the mere ground of its being “pretty” — his taste being far more for what is quaint, odd, or semi-grotesque.  Dante’s specimens of fauna however were often very slightly, as also funny and out-of-the-way.  I will name some, as they happen to come; others have passed from memory into the limbo of oblivion.”

“Persons who are familiar with the management of pets will easily believe that several of these animals came to a bad end.  Punch the puppy would get lost; one or other bird would get drowned; the dormice would fight and kill one another, or would eat up their own tails, and gradually perish; Wolf the deerhound could get no  adequate exercise and was given away; the parakeets were neglected at some time that Rossetti was absent from home, and on his return they were found dead.  Other animals, owing to their burrowing or reclusive habits, disappeared.  An armadillo was not to be found; and the tale went — I believe it to be not far from true –that having followed his ordinary practice of burrowing, he turned up from under the hearthstone of a neighbor’s kitchen, to the serious dismay of the cook, who opined that, if he was not the devil, there was no accounting for what he possibly could be. “

“The raccoon, as winter set in, made up his mind to hibernate.  He ensconced himself in a drawer of a large heavy cabinet which stood in the passage outside the studio-door.  The drawer was shut upon him, without his presence in it transpiring, and after a while he was supposed to be finally lost in the house.  When spring ensued, many mysterious rumbling or tramping or whimpering noises were heard in the passage, or in the studio as coming from the passage.  My brother mentioned them to me more than once, and was ready to regard them as one more symptom, by no means the first and only one, that the house was haunted.  At last, and I think by mere casualty, the drawer was opened, and the raccoon emerged, rather thinner than at his entry.  What the other stories of ghosts about the old mansion amounted to I have mainly forgotten, but am aware that a servant, a sufficiently strong-minded young woman, saw a spectre by a bed-room door in November 1870.  The ghost, according to Miss Caine, “was a woman, and appeared sometimes at the top of the second flight of stairs.  She retreated to the room overlooking the Embankment.”  My brother never beheld any such miscellaneous ghosts, nor did the idea of them disturb him in any sort of way, although in this and other instances he was not at all hostile to the notion that they might possibly be there.  I will not here start the question whether a belief in ghosts is in itself evidence of unreason; but I will say that, after making allowance for belief in their possibility, my brother’s attitude of mind on the subject was not unreasonable, as he thought, assuming their existence, they are just as much a part of the scheme of Nature and the Universe as any other part, and therefore not to be regarded with mere panic.  A disembodied spirit is the same, mutatis mutandis, as an embodied one.” –Dante Gabriel Rossetti:  Family Letters by William Michael Rossetti