The works of John William Waterhouse often blend feminine beauty and mystery.  Above is Circe Invidiosa, his depiction of the goddess Circe. With a sumptuous  blend of greens and blues, he created a world that draws us in and mesmerizes. It’s as if you can feel yourself transported into Circe’s world. You can hear the water echoing through a secluded grotto.  It is dark.  Calm and cool.  It’s incredibly beautiful.  Not a passive beauty, but a powerful beauty born of Circe’s focus and intensity. Circe is poisoning the water in which Scylla bathes, turning her into a sea-monster.  Why?  Over a man, of course.

The goddess Circe is mentioned in Homer’s Odyssey and in Hesiod’s Theogeny, as well in other ancient Greek writings.  She is a goddess of magic and metamorphosis:

KIRKE (or Circe) was a goddess pharmakeia (witch or sorceress) who lived with her nymph attendants on the mythical island of Aiaia. She was skilled in the magic of metamorphosis, the power of illusion, and the dark art of necromancy. When Odysseus landed on her island she transformed his men into animals, but with the help of the god Hermes, he overcame the goddess and forced her to release his men from her spell. Kirke’s name was derived from the Greek verb kirkoô meaning “to secure with rings” or “hoop around”–a reference to her magical powers. (Via Theoi.com)

It is Waterhouse’s simplicity that I admire in Circe Invidiosa. We are not distracted by background scenes. It is all about Circe.  Waterhouse has chosen to depict Circe in a scene from Ovid’s Metamorphoses:

Having tried without success to lure the deity Glaucus away from the object of his affection the beautiful nymph Scylla, Circe is filled with envious rage. In the seclusion of a quiet grotto, she poisons the water where Scylla goes to bathe and turns her rival into a dreadful sea monster. Waterhouse’s handling of the scene is brilliantly economical. With grim determination, Circe empties a bowl of green poison into the waters, half hovering, half standing on the already transformed Scylla, who writhes beneath the surface. Her waist-length hair, meanwhile billows up and out, as if disturbed by a rush of deadly vapours” (Trumble, Angus. Love and Death in the Age of Queen Victoria. Adelaide: Art Gallery of South Australia. 2002.)

Waterhouse also portrayed Circe with Odysseus in a scene from The Odyssey.  I’ve included this painting in my post about hidden Waterhouse signatures. This work is one of my favorite examples of a mirror used by an artist to allow us to look beyond the main focal point of a painting. (I’ve looked at mirrors in Pre-Raphaelite art in previous posts.  In Il Dolce Far Niente and Viola, the mirrors offer a glimpse into an area of the room that we can not see. You might like the post The Impossible Mirror of Lady Lilith.)  Here, in Waterhouse’s Circe Offering the Cup to Odysseus, the mirror furthers the narrative, giving us our only look at Odysseus. 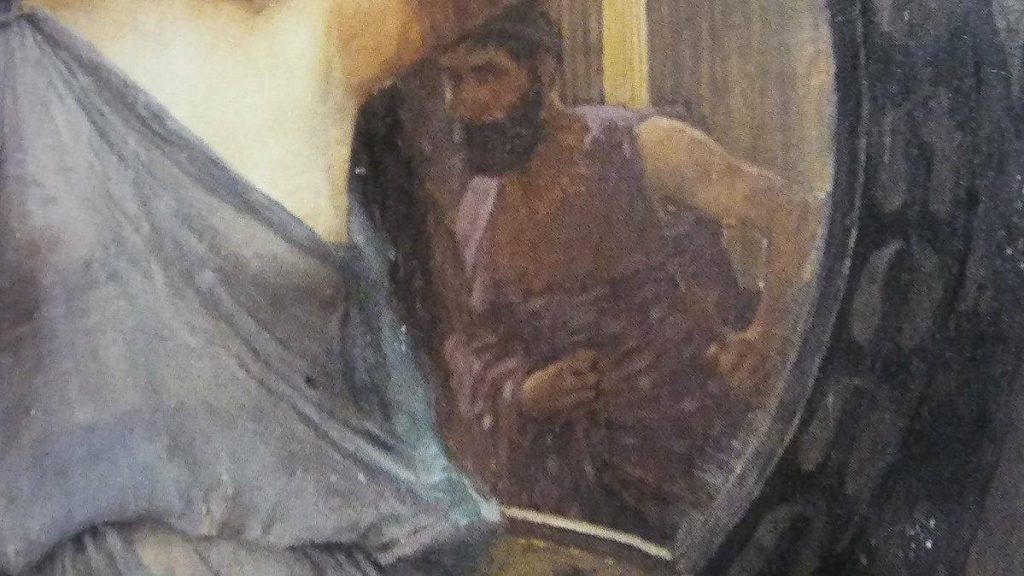 Technically, it is Odysseus that is the hero of the story, yet he is relegated to the background and seen only in reflection.  It is the beautiful and powerful Circe who appears center stage.  Stage, indeed — for Circe strikes a theatrical pose as she offers him her poison from an elaborate throne. The throne itself seems to be situated on a platform, giving Circe height from which to lord her power over men.  The men who have entered her domain have all been given her poison-laced wine and transformed into animals.  At the foot of her throne lies one of Odysseus’ men, one of the many mariners turned into swine. 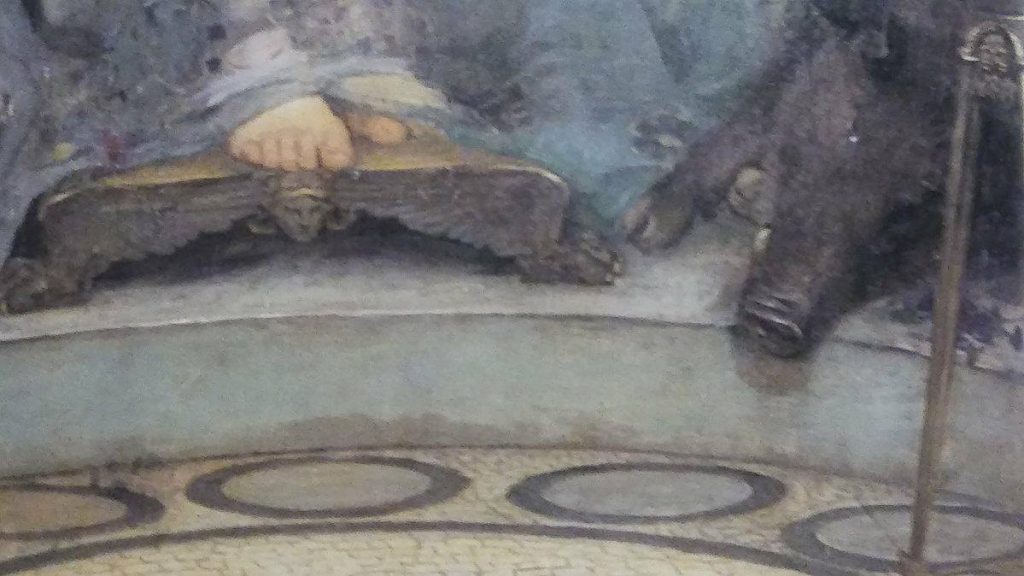 Dante Gabriel Rossetti wrote a sonnet inspired by Sir Edward Burne-Jones’ painting The Wine of Circe; background information about this work is available at The Rossetti Archive:

Circe still has a place in popular culture. In the DC Comics Universe, she is an enemy of Wonder Woman and in 2013, she appeared in the BBC show Atlantis as a witch Hercules turns to for help with disastrous results.

Circe is an enchantress, a murderess.  Her story is an enduring one whose influence can be found in many works, in fact tvtropes.org rightfully included her in the ‘Hot Witch’ list of tropes.  Looking beyond the sorcery and danger of being turned into swine, I see Circe as an example of double standards as well.  Odysseus becomes Circe’s lover, but in the scope of the story we are supposed to understand and forgive him even though his wife Penelope resists all suitors and remains faithful until her husband’s return.  Perhaps Circe is the temptress at the root of all tales that include an unfaithful husband who simply didn’t mean to do it, the guy the audience forgives because he’s just so damn likeable.  Circe is not nice, which means we can lay all the blame upon her, scorn her, and judge her.  It also means that a Circe-character rarely wins the man she loves in the end.