The model for Millais’ painting of Portia has often been incorrectly identified as Shakespearean actress Ellen Terry. The model was actually Kate Dolan, although the mistake is understandable as she was painted wearing Ellen Terry’s costume:

Of course I will lend you the dress (here it is.) or anything in the world that I possess, that could be of the very smallest service to you.

The dress was away in Scotland being cleaned for storing, or I should have sent it to you before–

Portia is the heroine of The Merchant of Venice.  You may be familiar with one of her speeches:

The quality of mercy is not strain’d.It droppeth as the gentle rain from heavenUpon the place beneath. It is twice blest:It blesseth him that gives and him that takes.

Ellen Terry fascinates me and you can read one of my past blog posts about her here.

Her great-nephew, Sir John Gielgud, mentioned her in his 1979 autobiography (a wonderful read). Gielgud had a long history of the theatre on both sides of his family and was lucky enough to see Ellen Terry perform several times in his childhood. 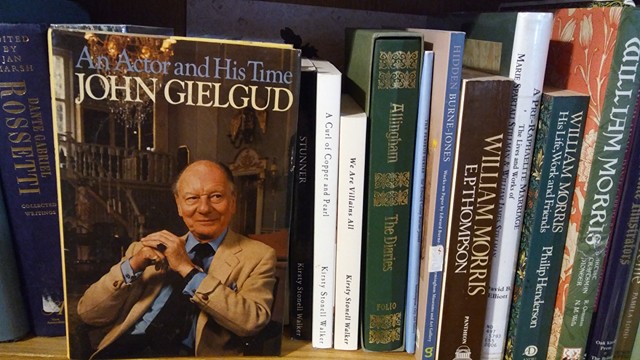 “Among the Terrys Ellen was, of course, the ‘Great Star’.  She led a somewhat irregular private life.  She did occasionally come to our house, but my mother thought her restless and fidgety, and preferred the acting of her sister Marion.  I fell madly in love with Ellen the first time I ever saw her on the stage.  I decided that the restlessness was part of her glory, because what I remember most about her is her movement, although she was then in her seventies, deaf, rather blind and very vague.  But when she came on you really believed that she was walking on the flagstones of Venice or in the fields of Windsor.  She moved with an extraordinary spontaneity and grace, holding her skirts gathered in two hands or bunched up over one arm, and crossed the stage with an unforgettable impression of swiftness. in her great days it was always said that the lines in Much Ado –‘For look where Beatrice like a lapwing runs/Close by the ground to hear our conference’–were exactly applicable to her.  Shaw said that she had a genius for standing still, when she was not making the most beautiful movements.” (Gielgud, John, An Actor and His Time, London: Sidgewick & Jackson, 1979)

I think what I love most is his description of her as a “Pre-Raphaelite actress”.

“She was a very Pre-Raphaelite actress.  She had sat for painters like Rossetti, and she had known and talked with all the great men of her time–Tennyson, Browning, Ruskin, Wilde–and had learned a great deal from them.  Yet she had a real humility. When you met her, you felt that she was ready to learn from children, or from anybody else with whom she came into contact.”  (Gielgud, John, An Actor and His Time, London: Sidgewick & Jackson, 1979)