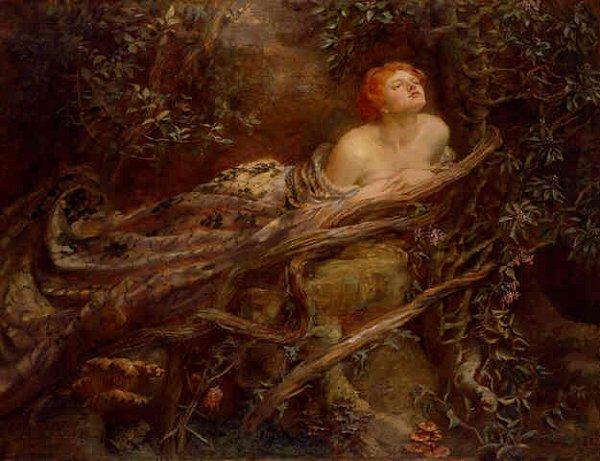 Seen above is Lamia, the Serpent Woman by Anna Lea Merritt. Be wary of her beauty, for she means to consume you.

In mythology, Lamia is a mistress of Zeus and her affair with him angered Hera so much that she transformed Lamia’s children into monstrous beings.

Grief-stricken, Lamia devours any child she finds, thus becoming a monster herself.

Like most myths, her story has become convoluted. In some tales, Hera forced Lamia to eat her own babies. In others, Lamia attacks children out of a consuming anger and jealousy.

Some depictions have taken away her eyesight and, more graphic still, there is a version of the myth in which Zeus has given her the ability to remove her own eyes.

Many folkloric traditions find their roots in Lamia, such as succubi or any female vampiric creature that preys on men. In Neil Gaiman’s Neverwhere, for example, Lamia is a beautiful creature called a ‘velvet’ that preys upon you for your warmth. The velvets are seductive with a hypnotic power that is quite similar to a depiction of a siren.

I think it would be easy to see Lamia as a mere trope, a plot device to illustrate the evil power of seduction and the devastation it could cause.

Except the more I think about her, the more I see her as a figure of layered complexity. Her monstrous attributes are not of her own creation but are born out of the tragedy inflicted upon her. She is made evil by living every mother’s dreaded fear and she continues this cycle of pain by then perpetuating it upon others.

The story could be seen as a warning to avoid tempters like Lamia who would destroy you. Or perhaps the lesson is that Lamia should have dealt with her grief in a way that did not ruin other lives.

Hera is probably the true monster for attacking Lamia’s children instead of dealing with her rival directly. Is it a lesson in the dangers of uncontrollable anger?  Or a lesson in lust?

It’s hard to ignore the possibility that Lamia’s tale might have been different had she not engaged in a liaison with Zeus at all.

Myths are the ultimate drama; no party is truly innocent. We can twist and turn the story and explore it from multiple viewpoints, which is why myths persist and are so often reinterpreted in popular culture.

John Keats’ 1819 poem about Lamia has given us the version that most of us are familiar with.

Lamia appears as a serpent and the love of a man enables her to shed her skin and change into a beautiful woman. Despite her innocent-looking human form, she is still a danger, of course.

It’s no wonder that Keats’ poem fascinated Pre-Raphaelite artists –the poet employs such vivid imagery. His description of Lamia’s transformation is powerful and evocative. (You can read the complete poem here)

“She was a gordian shape of dazzling hue,
Vermilion-spotted, golden, green, and blue;
Striped like a zebra, freckled like a pard,
Eyed like a peacock, and all crimson barr’d;
And full of silver moons, that, as she breathed,
Dissolv’d, or brighter shone, or interwreathed
Their lustres with the gloomier tapestries -“

I love how Keats describes her change with vibrant colors. She writhes about in scarlet pain.

As she changes her form, “she was undrest/Of all her sapphires, greens, and amethyst,”.

Is it any wonder that Keats’ works lend themselves well to artistic adaptations?  He makes color seem alive, swirling in the jeweled tones of my mind’s eye, undulating before me and drawing me into the fatal beauty of Lamia.

This poem practically begs to be recreated on canvas.

If you enjoy the works of A.S. Byatt (her book Possession is one of my deepest loves) I recommend her short story A Lamia in the
Cévennes, found in her collection Elementals: Stories of Fire and Ice. She wields color as masterfully as Keats.

“He swam more and more, trying to understand the blue, which was different when it was under the nose, ahead of the eyes, over and around the sweeping hands and the flickering toes and the groin and the armpits and the hairs of his chest, which held bubbles of air for a time. His shadow in the blue moved over a pale eggshell mosaic, a darker blue, with huge paddle-shaped hands. The light changed, and with it, everything.”–A.S. Byatt

Keats wrote to his brother in 1819 ‘I have been reading over a part of a short poem I have composed lately, called Lamia, and I am certain there is that sort of fire in it that must take hold of people some way; give them either pleasant or unpleasant sensation–what they want is a sensation of some sort.’  (via online-literature)

4 thoughts on “Lamia, seductive and monstrous”