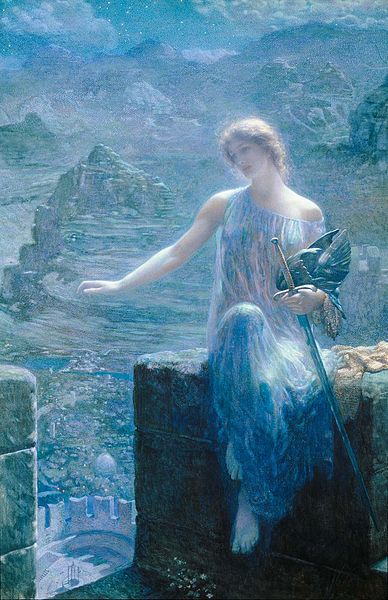 Seen above is The Valkyrie’s Vigil by Edward Robert Hughes.

Valkyries have been described as ‘dark angels of death’, ‘choosers of the slain’ and ‘spirits of slaughter’.  These battle maidens appear on horseback with swords drawn, ready to guide those chosen to die to Valhalla.

Usually depicted as warlike and strong, the Pre-Raphaelite-influenced works of Frederick Sandys and Edward Robert Hughes shows them in a more delicate, feminine light.

Hughes’ Valkyrie is contemplative.  Her face is sorrowful and the misty blue overtones of the painting create a supernatural atmosphere. It is a beautiful yet somber work that indicates she does not take her duty lightly, she feels the weight of the souls she has helped to transport.

Frederick Sandys shows his Valkyrie to be communicating with a raven.  Possibly the raven is used as a symbol of death or perhaps he intended the raven to be either Huginn or Muninn, the ravens of Odin. Huginn (thought) and Muninn (memory) would travel around the world daily, bringing news to Odin upon their return.  Her foot rests upon a skull and poppies (a symbol of sleep, death, and remembrance) grow directly behind her foot.  Blue irises are also prominent in this picture.

“Maidens of death” are prominent in Pre-Raphaelite art.  Hamlet’s Ophelia and Tennyson’s Lady of Shalott are portrayed repeatedly; they are tragic tales of death caused by madness and curses that are beyond the female’s control.  The Valkyries, however, are the deliverers of death. It is their destiny and while they are not the typical mythological female represented by Pre-Raphaelite art, both Sandys and Hughes painted them with beauty and pathos.

1 thought on “The Valkyrie’s Vigil”