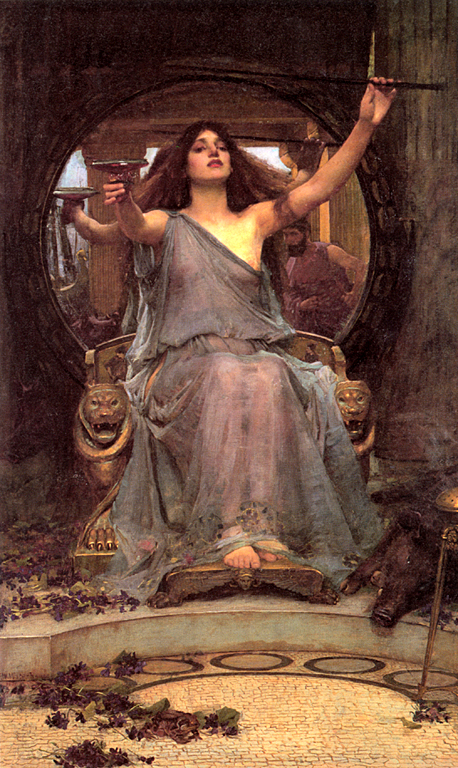 There are many artistic representations of Circe.  Previous posts on this blog include Circe Invidiosa and The Wine of Circe.  Kirsty Stonell Walker explores Circe more deeply in her post Snowdrops, Swine and Seductive Sorceresses.

I’ve been looking at mirrors in Pre-Raphaelite art in my previous posts.  In Il Dolce Far Niente and Viola, the mirrors offer a glimpse into an area of the room that we can not see.  Here, in Waterhouse’s Circe Offering the Cup to Odysseus, the mirror has more function. It furthers the narrative, giving us our only look at Odysseus.

Technically, it is Odysseus that is the hero of the story, yet he is relegated to the background and seen only in reflection.  It is the beautiful and powerful Circe who appears center stage.  Stage, indeed — for Circe strikes a theatrical pose as she offers him her poison from an elaborate throne. The throne itself seems to be situated on a platform, giving Circe height from which to lord her power over men.  The men who have entered her domain have all been given her poison-laced wine and transformed into animals.  At the foot of her throne lies one of Odysseus’s men, one of the many mariners turned into swine.