Dante Gabriel Rossetti’s painting Proserpine is an arresting and visually striking work.  Blogging about it once has never been enough; it resurfaces in my posts again and again.

The myth of Proserpine/Persephone is a story that resonates with me on multiple levels, so I think that in writing about it I am attempting to explore that theme in different ways.  But story aside, Rossetti’s creation is so compelling that it catches the attention of many people who have never even heard of Pre-Raphaelite art. The deep green hues, the inviting pomegranate, Jane Morris’ beautiful yet inscrutable face. I see it on book covers, greeting cards, or other products that are often quite far removed from both the Proserpine myth and the story of Dante Gabriel Rossetti/Jane Morris.

My previous explorations include: 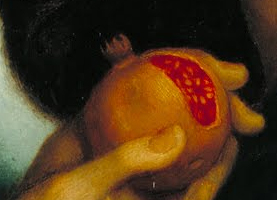 I think that when I first started this blog, I naively thought that blogging about Proserpine once would be enough, that this blog would basically be a description of Pre-Raphaelite paintings, shared once and once only. It has been several years (eleven since I began my first site LizzieSiddal.com) and I am now of the belief that a single blog post will never be enough to explore one painting. Any painting. Whatever my goals in the beginning, I have realized that art is deeper than that. There is so much rich material there, the life of the artists, the identity of the model, the unexpected themes and metaphors that arise, the resonance it creates in your own life… I feel that I could probably never even scratch the surface in one post. I suppose that this epiphany is both a realization and a promise.  It means that this post is about what I’ve learned over the past eleven years of blogging and an understanding of where I’d like this blog to go. (Even if I might not be expressing it well at the moment.)

Works created over 100 years ago are still alive, still open to interpretation. I recently watched a documentary where the Bible and the U.S. Constitution were described as living documents. Such a notion resonates with me. Given the way we breathe life into them, reinterpreting them with each generation, and the way those documents affect out lives, it is an apt description.  Can’t art fall into this category as well?   Are paintings hanging silently waiting for us to project meaning onto them?  Or is  a wealth of meaning  already there, waiting for us discern a meaning?  I think it is a mixture of both.

(FOR A PICTURE)–Dante Gabriel Rossetti

Afar away the light that brings cold cheer
Unto this wall,—one instant and no more
Admitted at my distant palace-door.
Afar the flowers of Enna from this drear
Dire fruit, which, tasted once, must thrall me here.
Afar those skies from this Tartarean grey
That chills me: and afar, how far away,
The nights that shall be from the days that were.

Afar from mine own self I seem, and wing
Strange ways in thought, and listen for a sign:
And still some heart unto some soul doth pine,
(Whose sounds mine inner sense is fain to bring,
Continually together murmuring,)—
“Woe’s me for thee, unhappy Proserpine!”