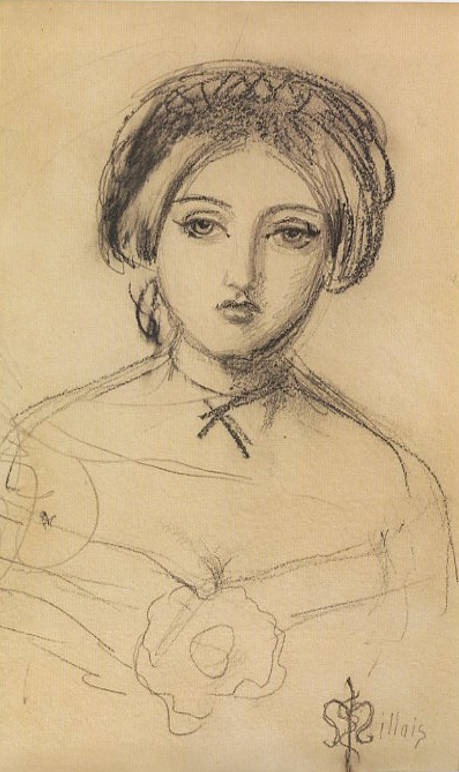 The marriage of Sir John Everett Millais is often talked about due to its scintillating details. The marriage itself was not scandalous, Millais and his wife Effie seem to have had a happy life together. But the fact that prior to her marriage, Effie was married to critic John Ruskin is a source of infinite discussion and speculation. Their marriage was annulled due to the fact that it was a union that had not been consummated, which Effie was made to prove to the court.  Setting aside the shocking details of how Millais and his bride fell in love, let’s look at their marriage itself.

In The Life and Letters of Sir John Everett Millais, the artist’s son describes his parents marriage:

On July 3rd, 1855, John Everett Millais was married to Euphemia Chalmers Gray, eldest daughter of Mr. George Gray, of Bowerswell, Perth. In accordance with the Scottish custom, the wedding took place in the drawing room at Bowerswell, and immediately afterwards came the baptism of the bride’s youngest brother, between whom and his eldest sister there was a difference in age of nearly twenty-six years.

And here let me say at once how much of my father’s happiness in after years was due to the chief event of this day.  During the forty-one years of their married life my mother took the keenest interest in his work, and did all in her power to contribute to his success, taking upon herself not only the care of the household and the management of family affairs, but the great bulk of his correspondence, and saving him an infinity of trouble by personally ascertaining the objects of his callers (an ever increasing multitude) before admitting them into his presence. A great relief this, for business affairs and letter-writing were equally hateful in his eyes; and in spite of himself, his correspondence increased day by day.

Possessed in a considerable degree of the artistic sense, she was happily free from the artistic temperament, whilst her knowledge of history proved also a valuable acquisition. When an historical picture was in contemplation, she delighted to study anew the circumstances and the characters to be depicted, and to gather for her husband’s use all particulars as to the scene and the costumes of the period.

Her musical accomplishments (for she was an excellent pianist) were also turned to good account in hours of leisure, and not infrequently as a soothing antidote to the worries that too often beset the artist in the exercise of his craft.

John Guille Millais paints a rosy picture of an artist whose wife is perfectly suited for him in both temperament  and her accomplishments. His mother’s prior marriage to John Ruskin was only touched upon in a footnote:

“Miss Gray had been previously married, but that marriage had been annulled in 1854, on grounds sanctioned equally by Church and State. Both good taste and feeling seem to require that no detailed reference should be made to the circumstances attending the annulment. But, on behalf of those who loved their mother well, it may surely be said that during the course of the judicial proceedings instituted by her, and throughout the period of the void marriage and the whole of her after years, not one word could be, or ever was, uttered impugning the correctness and purity of her life.”

One can hardly fault a son for discussing such a delicate matter as his mother’s first marriage in such a decorous manner. Among Pre-Raphaelite enthusiasts, we discuss the Ruskin/Millais affair frequently, occasionally with indelicate humor. But how often do we consider what the Millais offspring might have felt about their mother’s previous marriage?

Whatever may have happened between Effie and Ruskin, she seems to have found happiness at last with Millais.  Despite the fact that she confided to her diary that he wept uncontrollably while they exchanged their vows, Millais seems to have loved married life. He wrote to William Holman Hunt, “I can not enumerate the advantages now – Man was not intended to live alone.” In later years she blamed her nervousness and insomnia on the years spent with Ruskin, although the eight children she and Millais had in quick succession must have had a toll on her. Whether or not her relationship with Ruskin resulted in lasting mental trauma is impossible to say. But it is interesting that negative aspects of her health were blamed on him, absolving Millais in her eyes.

In The North-West Passage, we looked at the somewhat humorous lengths Effie would go to in order to secure a gruff old sailor as a model for her husband.  Her notebook provides interesting background details about her husband’s work, Apple Blossoms being a good example.  I think that, on the whole, Effie was a loving wife who tried to put the past behind her. She would have been more successful if the memories of society had not been so acute. Queen Victoria refused to allow her to be presented at court, although in 1896 she did grant Effie a private audience as Millais lay dying of throat cancer. Effie died the following year. Her marriages are still a topic of great analysis. The fact that her story has been told onscreen recently in both Emma Thompson’s film Effie Gray (2014) and the BBC program Desperate Romantics (2009) shows that even in our modern era where scandals usually contain more scurrilous aspects, Effie’s marriage is still able to captivate us as much as it did her contemporary Victorians. I wonder how she would have felt about that. 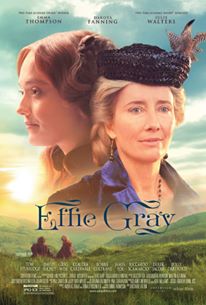 Effie Gray is included in the post What is the ‘Pre-Raphaelite Woman’?

A Review of Suzanne Fagence Cooper’s biography of Effie Gray

6 thoughts on “The Happy Marriage of Effie Millais”