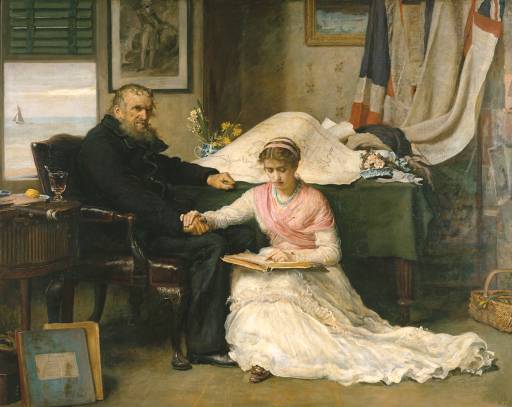 In The North-West Passage, Millais used a retired sailor named Captain Trelawny for the old mariner.  Trelawny was described affectionately as a “jolly old pirate” and had a colorful past to prove it. The Life and Letters of Sir John Everett Millais, written by the artist’s son, mentions briefly that Trelawny was once abducted by Greek pirates and once they had him on dry land, he married the chief’s daughter and honeymooned with her in a cave for an entire weekend.  Millais had met the old sailor several times socially, and even though Trelawny had declared the artist to be a friend, he steadfastly refused to be painted.

It was Millais’ wife, Effie, who convinced Trelawny to pose. His cooperation came at a price, however:

At last, in desperation, she went off unknown to her husband, and boldly tackled the picture-hater, who, after many refusals, turned round suddenly and said in his bluff way, “But I’ll tell you what I’ll do. I am greatly interested in a company for the promotion of Turkish baths in London. Now, if you will go with my niece and take six Turkish baths and pay for them yourself, I will come and sit six times to your husband.” Agreed. Now my mother had never been in a Turkish bath in her life, and knew nothing about them, but go she must or risk the success of the picture.  So on the days appointed Trelawny came to the studio, and being assured that my mother had had her bath, surrendered himself to the artist; and so the picture was finished.  Not, however, as it appears now; for as a strict teetotaler, Trelawny protested against the introduction of a tumbler of hot grog such as an old sea-dog might naturally have beside him, and it was only after sittings were over that this was added as an accessory that could hardly be dispensed with.  Poor Trelawny, when he saw it in the Academy, was very angry, fearing that everybody would recognize his portrait; and though he remained on friendly terms with my father, I doubt whether he ever forgave this little joke of his. –The Life and Letters of Sir John Everett Millais

There are still Turkish baths operating in the UK. If you are interested in the experience or would like to see photos of the interiors, here’s a list of the remaining baths in the British Isles.

‘The North-West Passage”, exhibited at the Academy in the spring of 1874, was perhaps the most popular of all Millais’ paintings at the time, not only for its intrinsic merit, but as an expression more eloquent than words of the manly enterprise of the nation and the common desire that to England should fall the honour of laying bare the hidden mystery of the North. “It might be done, and England ought to do it”: this was the stirring legend that marked the subject of the picture: and its treatment by the artist lent a dignity and pathos  to the words that undoubtedly added to their force. “One touch of nature makes the whole world kin”; and here we have the touch in the attitude and surroundings of the brave old-sea dog, and the expression of his weather-beaten features as in deep thought he gives utterance to the sentiment nearest to his heart.  By his side is outspread a map of the northern regions; and with her hands resting on his, his daughter sits at his feet, reading what we may take to be the record of his previous efforts to reach the Pole.  He is at home now–this ancient mariner, stranded on the sands of life, like the hulk of an old ship that has done its duty–but as he listens to those deeds of daring, the old fire burns within him, and in every lineament of face and figure we see how deeply he is moved. –The Life and Letters of Sir John Everett Millais

The model for the daughter is only identified in The Life and Letters as Mrs Ellis, but she can also be seen in Millais’ painting Stitch! Stich! Stich!

Also see: A Prosaic by Useful Service: Bathhouses and Washhouses via VictorianWeb.