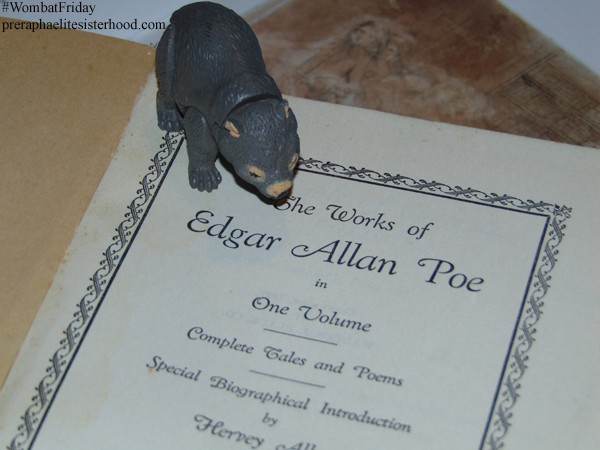 Edgar Allan Poe died October 7th in 1849, quite soon after the Pre-Raphaelite Brotherhood was formed.  Poe was a huge inspiration for poet and artist Dante Gabriel Rossetti. I’m focusing only on Poe in this post, but Tennyson’s death was this week as well.  Kirsty Stonell Walker wrote an excellent post about his death that also explores the mourning of celebrities and public grief.

“Poe is a key figure in the development of DGR’s literary style as well. The second-order romanticism developed in Poe’s imaginative writings, and explicated in essays like “The Poetic Principle” and “The Philosophy of Composition”, is recapitulated in DGR’s work, where the key is primarily Dantean rather than (as in Poe) Shelleyan/Byronic.”–RossettiArchive.com

Here is Rossetti’s illustration for Poe’s poem Ulalume, drawn circa 1848:

Rossetti and Poe were masters at blending melancholy with beauty, each with their own particular flair. Rossetti’s illustration of Ulalume shows a poet walking through a ‘ghost-haunted woodland’. The winged figure represents his Psyche. He walks and talks with his Psyche on a seemingly aimless journey. Eventually he happens upon the tomb of his dead love Ulalume, leading us to believe that their stroll was not so happenstance after all. He has unconsciously visited her grave, not realizing that it was the first year anniversary of her death. It seems uncanny that Rossetti and Poe both famously explored the subject of deceased love. Poe lost his wife Virginia prior to the writing of Ulalume, while Rossetti would lose his wife in 1862, several years after writing The Blessed Damozel. (You might like my previous post Rossetti and the art of death.)

Other Rossetti illustrations of Poe works include The Raven and The Sleeper: