“There’s always a siren singing you to shipwreck.” – Radiohead, “There, There” 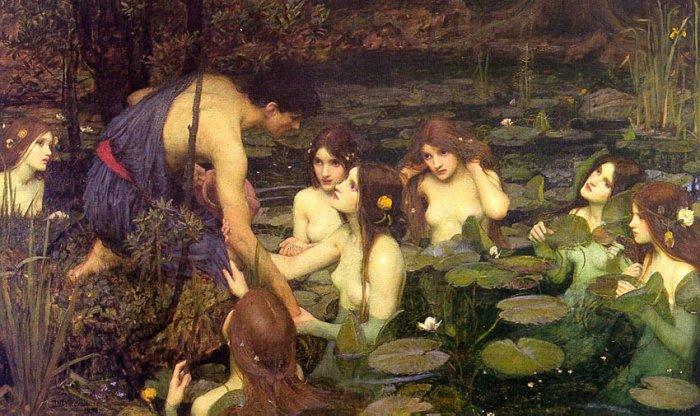 Hylas and the Nymphs by John William Waterhouse depicts a scene from Jason and the Argonauts.  Hylas was the son of King Theiodamas, who was killed in battle by Herakles.  Herakles then raised Hylas as his own. Known for both his striking beauty and his military prowess, Hylas was later taken to Argo by Herakles and became an Argonaut.  Waterhouse’s work shows the moment when Hylas has left their ship and encounters a group of nymphs.  Struck by his beauty, the nymphs lure him into the water where he will meet certain death.

Their danger is a delicate one.  Subtle beauty with an undercurrent of menace that the viewer is only aware of once you know what they are. This is similar to La Belle Dame sans Merci, Keats’ lady without mercy.

While often depicted menacingly in modern stories, according to myth they lack the human ability to hate or to kill out of the murderous intent a mortal person would have. They are what they are and should be treated with the same fear and respect of any other dangerous creature in the wild. In other words, admire from a safe distance.

Sir Edward Burne-Jones depicts the moments after the male has been lured in his painting, The Depths of the Sea.

I am convinced that Stephanie Seymour and Axl Rose reenacted Burne-Jones’ painting in the Guns N’ Roses video  Don’t Cry.  The band’s videos for Don’t Cry and November Rain  contain narratives that seem to feed off each other and, frankly, they are perfect examples of blending music and cinematography in a lush, detailed way. Both explore volatile relationships and death, making The Depths of the Sea a particularly fitting choice. 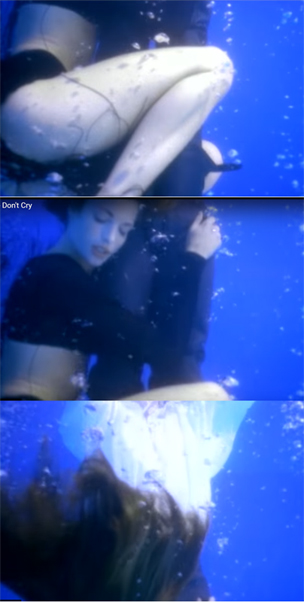 You can see it in this youtube video at approximately the 1:00-minute mark.  Don’t blink or you’ll miss it.

In 1853, Dante Gabriel Rossetti drew Boatmen and Siren.  One of the boatmen is captivated by the siren but is saved from certain death by his companion.  The accompanying inscription was written by Jacopo da Lentino, an Italian poet of the Rennaissance era whose work was translated by Rossetti in The Early Italian Poets:

I am broken, as a ship

Perishing of the song

Sweet, sweet and long, the songs the sirens know.

Voyaging in those straits,

Rossetti depicted sirens in two more paintings, Ligeia Siren and A Sea-Spell.  Both differ in their execution.  Ligeia Siren strikes me as a warrior and the veil on her head almost seems to mimic a helmet of sorts.  She is boldly and unflinchingly nude with only the veil fluttering between us and complete exposure.  A Sea-Spell shows us a more demure siren surrounded by flowers. Rossetti described the work saying,  “The idea is that of a Siren, or Sea-Fairy, whose lute summons a sea-bird to listen, and whose song will soon prove fatal to some fascinated mariner” (The Works of Dante Gabriel Rossetti, 1911).  He wrote a sonnet to accompany the painting which says, in part, /She sinks into her spell: and when full soon/Her lips move and she soars into her song/.  The imagery of sinking into her spell and soaring into her song mimics the ocean’s wave to me; Rossetti is luring us into a watery world of his own creation as if he is a siren himself.

Sirens represent danger disguised as beauty, certain death hides behind their enchanting and mystical song.  John William Waterhouse depicted this in his painting The Siren.  The sailor is vulnerable as he reaches towards her; she remains calm and shows no sign of mercy or regret.

Herbert James Draper depicted sea-maidens that are hard to ignore.  Unashamed in their naked glory they lack human modesty.  They may inhabit a form like that of a mortal woman but like Waterhouse’s Hylas and the Nymphs they are distinctly other.  This corporeal familiarity lures their prey in through a sense of safety, but they are as dangerous as an undomesticated animal in the wilderness.  Should we judge them then?  If they are temptresses perhaps it is because of the feelings we project onto them instead of the other way around.

It’s not solely the physical beauty of a siren that tempts us, though.  Music itself is seductive in nature.  A compelling song has the power to surround you, envelope your mind and influence your mood. Even hearing a portion of a song from our past has the capacity to  evoke a strong visceral response. From cradle to grave, music influences us in a myriad of ways.   Scientists have found that music stimulates more parts of the brain than any other human function.  It’s not shocking that stories of sirens involve the hypnotic effect of a haunting melody.

I see these works as cautionary tales, encouraging the viewer to resist temptation.  The song of the siren, yet another version of the femme fatale, is a tale that has existed since man first began to share stories. A siren represents the emptiest of promises. She holds the possibility of fulfilling our deepest desires, but she deceives.  She will always deceive.  I think the broad message it serves is that beauty and pleasure exist in a moment, but it is a moment that can alter your path dramatically.  Attraction is not always what it seems.