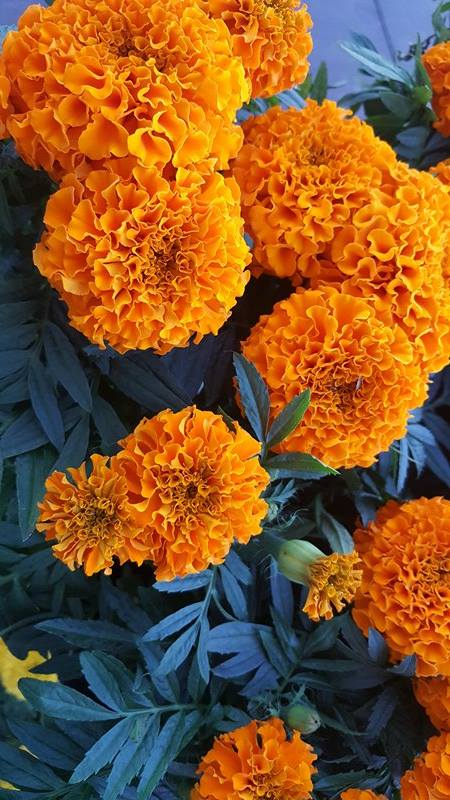 Our Halloween revelry is over and now we honor our ancestors with the Day of the Dead.  Throughout Mexico and the Southwestern U.S.,  this is Dia de los Muertos, a special event that focuses on togetherness of family and friends and honoring those who have passed on.  It is a beautiful way to honor the importance of family and it emphasizes  life, love, and the inevitable transition of death.  Delving into grief and loss and how we can process that through art is incredibly important to me; you may be interested in my posts Art is a Mirror, Exploring Death through Art and the Beauty of Melancholy.

Marigolds are a significant part of the holiday: they are strewn to help guide the spirits home and are left as gifts on shrines and graves.  Personally, I have a passion for marigolds and their unique, sharp scent.  I wrote about them a couple of years ago in a post that follows the thread of my interest in the hardy blossom.  It seems fitting to share that post here for Dia de los Muertos.  And since it is a day that honors the dead, I’d like to remind you of the current drive to raise funds for Pre-Raphaelite model Fanny Cornforth.  She deserves a memorial to be placed on her pauper’s grave.

Marigolds were the first flowers I planted as a child. I have a distinct memory of my mother buying them and preparing the flower bed, showing me how to use the spade and how to space the flowers so that they weren’t either too close to each other or too far apart.  Isn’t it funny how every moment of a certain day can be seared in your memory, forever there even though nothing notable happened?  I remember planting the marigolds with my mother until the sun started to go down. I remember washing up for dinner and that afterward, my father and I watched Hitchcock’s Rear Window  on television.  It was the first time I had seen it and it seemed timely, as the story takes place in the middle of an uncomfortable heat wave.  We ate ice cream while we watched.  Now marigolds and Rear Window  have blended for me, creating an association that I can never shake.  When I smell their sharp scent,  my memory reels with the free feeling of summer, Grace Kelly in a stunning Edith Head dress, cold dirt in my hands, and fat yellow blossoms.

I have only just realized an added coincidence to viewing Rear Window on that particular day.  A flower bed provides a significant plot point, leading to the denouement of the film.  I won’t give it away in case you haven’t seen it, but here’s a glimpse at Raymond Burr as Thorwald with his garden, seen through Jimmy Stewart’s binoculars. 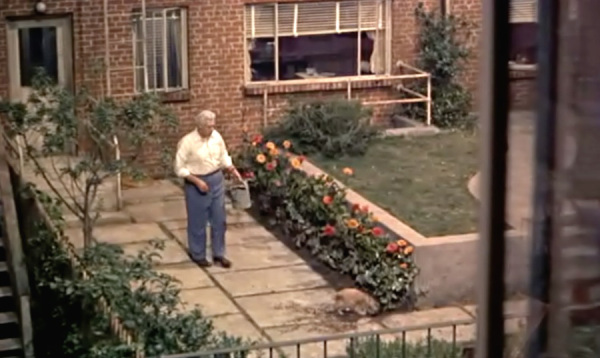 “Above is the composition of Fanny’s portrait, which you will see has taken after all a rather Venetian aspect. ‘Them be’ind’s merrygoes,’ as the fair original might say in her striking rendering of the word marygolds. ” (Dante Gabriel Rossetti in a letter to George Boyce.)

On Easter, I purchased several marigolds and on a whim, decided to photograph them with Rossetti’s painting of Fanny, Bocca Baciata. 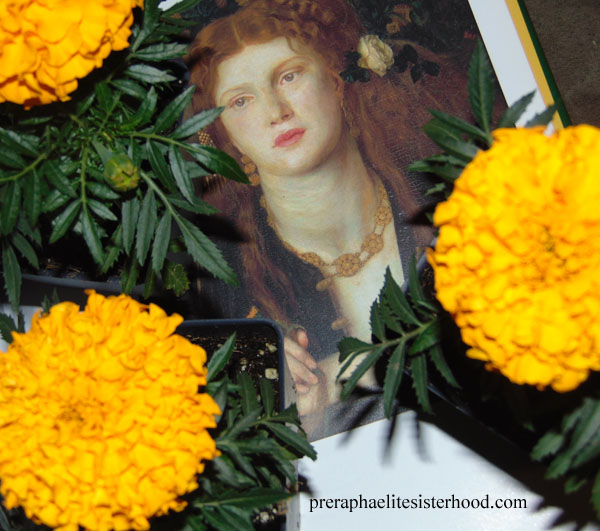 I’ve written about Bocca Baciata in the post Regina Cordium.  It is an important piece when analyzing the works of Dante Gabriel Rossetti. It ushered in a radical change in style for him and after completing it, most of his works continued this theme of a single female, quite often depicted from the bust up and surrounded by flowers, jewelry, and other symbolic objects.

The use of Fanny Cornforth in Bocca Baciata is significant.  She is almost always described as a prostitute. In fact, the first image Rossetti painted her in was Found,

a work that remained unfinished, but in it, Fanny portrays a fallen woman.  Bocca Baciata translates into The Kissed Mouth,  and incidentally, this is the source of the title of my friend Kirsty Walker’s blog.  Bocca Baciata is taken from the text of Boccaccio’s Decameron:   “The kissed mouth does not lose its freshness, but renews itself like the moon”.  In other words, a woman who has experienced a sensual life should not be viewed as used goods.  The kissed mouth constantly regenerates into something new and fresh.  In Found, Fanny was an ashamed fallen woman who looks down, embarrassed by what she has become. In Bocca Baciata, Rossetti replaces those downcast eyes with a steady gaze.

Fanny Cornforth was a true, lifelong friend to Rossetti. As his muse, she helped him create a new direction in his works.  Later in life, she became his housekeeper even though she was constantly scrutinized by his friends and family.  Labeled a liar, a whore, and a thief, Fanny was not treated kindly by historians of the past.  Until in the 1980s when Jan Marsh published her book Pre-Raphaelite Sisterhood and most recently, Kirsty Stonell Walker published the first full-length biography of the model in Stunner: The Fall and Rise of Fanny Cornforth.

“I shall call the picture either Spring Marybuds or The Bower Maiden. It represents a young girl (fair) in a tapestried chamber, with a jar containing marybuds (or marsh marigolds, the earliest spring flowers here), which she is arranging on a shelf. Near her is a cat playing with a ball of worsted. The picture abounds in realistic materials & is much like theVeronicain execution & not inferior to that picture in colour.” 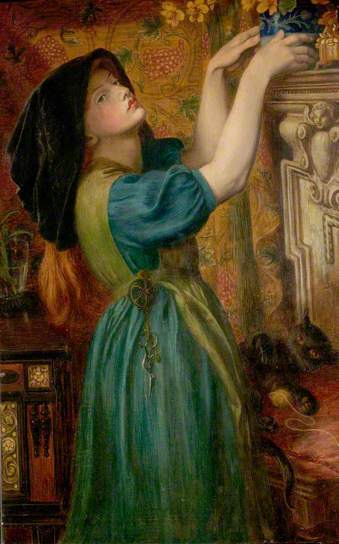 In the Victorian language of flowers, marigolds symbolized grief and pain. This symbolism reaches farther back in time, however. It was a sacred plant to the Aztecs, who used it for healing purposes as well as believing that the flower had magical and protective properties.  To this day, marigolds are frequently seen  on Dia de los Muertos alters in Mexico.  Far from symbolizing pain and grief, the Day of the Dead is an upbeat celebration that honors ancestors and lost loved ones in a colorful, cheerful way.

At the turn of the twentieth century, asters and sweet-peas were the most popular flowers. Yet disease caused a great decline in their growth.  You know what persisted? Marigolds. Hardy, strong, resilient marigolds. As for me, I will continue to embrace marigolds as memories of a summer gone by, and as my own personal nod to a Pre-Raphaelite Stunner with a sketchy past,  whose beauty may not have fit the mold.  Fanny Cornforth, like marigolds, never went down without a fight.

You may also like:  The Bias Against Fanny Cornforth