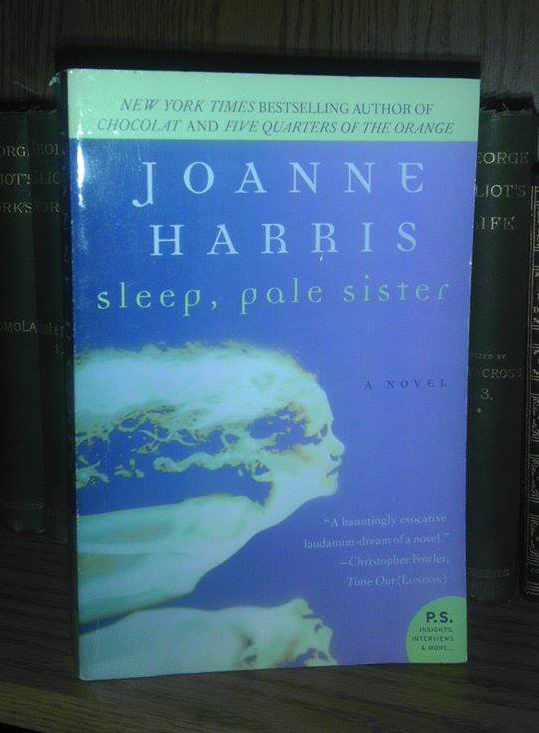 Before writing her famous bestseller Chocolat, Joanne Harris penned Sleep, Pale Sister, a provocative 19th-century story of madness, lies, and laudanum. Written in 1994, it was reprinted ten years later and introduced to a broader audience.  The recent reprint contains bonus materials in the back for further discussion including an author interview and background information about Harris’ inspiration for this compelling and strange story.
There are echoes of several Pre-Raphaelite figures in this tale, with John Ruskin being the most obvious.  It’s also a deeply immersive and magical story that uses imagery derived from the Tarot and a nod to Scherezade, who famously saved her life with the weaving of nightly stories in The Thousand and One Nights. The title is taken from Dante Gabriel Rossetti’s poem My Sister’s Sleep.
Artist Henry Chester deeply loves and reveres his muse.  He encounters her at a young age, a disturbingly young age mind you,  which mimics John Ruskin and his infatuation with Rose La Touche in the years after his annulment from Effie Gray. Chester  guides her and educates her, placing her on a metaphorical pedestal through which he admires her beauty and innocence. When he marries her, his Puritanical beliefs take over resulting in a domineering and controlling relationship that Effie did not expect.
What an artist feels about their muse isn’t always rooted in the reality of who they are, but what the artist projects on to them.  Henry Chester’s fascination with her innocence became an obsession that had little to do with Effie as a person.  She was completely objectified, becoming a decorative element in his life instead of a flesh-and-blood woman with the ability to pursue her own interests or make even the simplest of choices.  As his wife, she is his property to control, frustrating from his point of view when she did not do as she was told and frightening from her perspective once she realizes that her life has become a laudanum-laced prison.  She is meant to exist in a vacuum of purity and Chester goes to great lengths to attempt this by keeping her in a drugged state and even burning her much-loved books when he doesn’t approve of them. Chester is a man struggling with his own demons, though, and he has secrets that will unfurl themselves in ugly ways. His private passions may prove to be his undoing.
I think elements of this story explore the Victorian notion that a woman’s innocence must be preserved at all costs and that her mental state is delicate and tenuous.  Hysteria, derived from the word Latin hystericus meaning of the womb, was seen as an exclusively female problem and could result in a woman being shut away in frightening circumstances as seen in Wilkie Collins’ book The Woman in White or  Charlotte Bronte’s Jane Eyre. A Victorian mental asylum was a fearful, horrific place and the mere thought of ending up there was a very real and frightening threat.
Harris’ story is a mix of flawed characters, each with their own motivations.  Sleep, Pale Sister is a tale of passions and manipulation with no clear winners.  As mentioned before, it’s an early work so while it’s not as tight and polished as it could be, it’s still delightfully atmospheric and gothic. It’s a heady mixture of cemeteries, ghosts, and intrigue.  Personally, I love it and I think if you enjoy a story with what I think can be described as a Pre-Raphaelite flair, I highly recommend it.