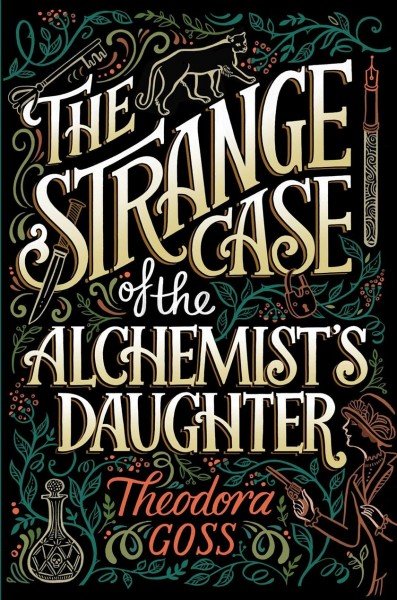 One of my favorite posts on this site is Monstrous Women, where I briefly discuss my admiration for not only Mary Shelley, but women in fiction and myth that can be considered monstrosities.  They pop up on Pre-Raphaelite Sisterhood repeatedly.  Lamia, for example, or Sidonia and  Medusa.   The Strange Case of the Alchemist’s Daughter was a delight to read, not only because of the inventive way Theodora Goss explores monstrous women, but because it’s just so good.

Based on some of literature’s horror and science fiction classics, this is the story of a remarkable group of women who come together to solve the mystery of a series of gruesome murders—and the bigger mystery of their own origins.

Mary Jekyll, alone and penniless following her parents’ death, is curious about the secrets of her father’s mysterious past. One clue in particular hints that Edward Hyde, her father’s former friend and a murderer, may be nearby, and there is a reward for information leading to his capture…a reward that would solve all of her immediate financial woes.

But her hunt leads her to Hyde’s daughter, Diana, a feral child left to be raised by nuns. With the assistance of Sherlock Holmes and Dr. Watson, Mary continues her search for the elusive Hyde, and soon befriends more women, all of whom have been created through terrifying experimentation: Beatrice Rappaccini, Catherine Moreau, and Justine Frankenstein.

When their investigations lead them to the discovery of a secret society of immoral and power-crazed scientists, the horrors of their past return. Now it is up to the monsters to finally triumph over the monstrous.

The way Goss has woven together the stories of Mary Jekyll, Diana Hyde, Beatrice Rappaccini, Catherine Moreau, and Justine Frankenstein is like a Gordian knot, tightly woven with intricate backstories for each woman.  Their histories and distinctive personalities unfold throughout their own personal notes, presented as asides during the narrative, which I think was a stroke of genius on the author’s part. It never disrupts the story, it enhances it and pulls the reader further into the lives of the characters.

Add to the mix Sherlock Holmes and Doctor Watson.  I have a lifetime of reading Sherlockian pastiches under my belt.  I have a sense of what works and what doesn’t.  The Strange Case of the Alchemist’s Daughter works.  Holmes is there, true to the way Conan Doyle created him, yet he does not overshadow Mary Jekyll’s tale.  He is the perfect addition to this group, for who else would be deserving of assisting such an unusual group of women?

In fact, on finishing the book I thought of this line of Sherlock’s from The Sign of the Four: “My mind rebels at stagnation. Give me problems, give me work, give me the most abstruse cryptogram, or the most intricate analysis, and I am in my own proper atmosphere. I can dispense then with artificial stimulants. But I abhor the dull routine of existence. I crave for mental exaltation. ”  Goss gave Sherlock an intricate problem, certainly, but she also crafted it in a way where we can enjoy the Holmes we love yet understand that he has his place.  He never pushes Mary Jekyll or any of the other women out of the forefront.

Reading this is a joy for any great lover of Victorian fiction.  It’s packed with literary references that are not self-conscious or forced.  Happening upon them makes reading the book fun, as it should be, and more than that, it leads me to believe that even though The Strange Case of the Alchemist’s Daughter must have been painstaking to research and write, Goss enjoyed herself.  You can feel it as the story unfolds and once you reach the end, you know she isn’t done.  There are more adventures to be shared.

Mary Jekyll and her friends, without planning it, formed a sisterhood.  Life is like that for many of us: you find your quest and along the way you encounter people. Some stay, some don’t.  One day you look around and see that you have assembled a tribe.  This is about camaraderie among outsiders who understand each other, who need each other, and I enjoyed seeing that here.  Together they created a place, a home, and a purpose where they belonged and became stronger together.  There’s a lesson in that for everyone who reads this book.