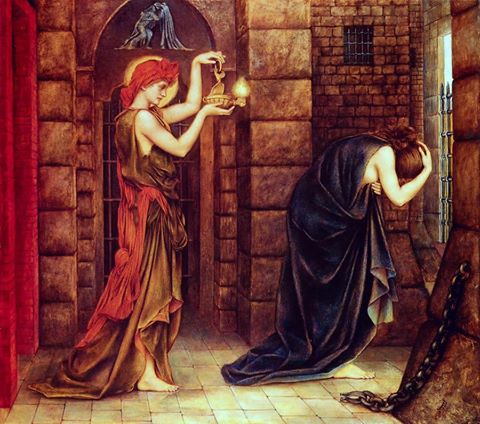 Last week I posted Evelyn De Morgan’s Hope in a Prison of Despair (seen above) on the Pre-Raphaelite Sisterhood Facebook page.

A happy byproduct of sharing things on the Pre-Raph Sisterhood Facebook page is that when people comment, like, or share the post, it pops up in my own feed again.  I noticed that the more I saw the image appear, the more my focus had shifted from the figures to the window.  It prompted me to think about Evelyn De Morgan’s works and how many times she’s depicted symbolic windows in allegorical prisons.

In The Soul’s Prison House, De Morgan personifies the soul as a beautiful woman. The De Morgan Foundation describes the work as follows:

“When a study for this work was exhibited in 1889, a quotation attributed to St. Augustine of Hippo was attached to it – “illuminate, oh illuminate my blind soul that sitteth in darkness and the Shadow of Death”. The Soul sits in its prison (the body) awaiting its release into the light beyond the prison window – the release of death. This echoes the painter’s Spiritualist belief, that the body is merely an earthly shell, an encumbrance, which the spirit longs to cast off in death, to move into the sun of the spirit-spheres. A similar idea is expressed in De Morgan’s painting “The Prisoner”–via The De Morgan Foundation

Her back may be to the window, but De Morgan places it right in the center of the painting so it doesn’t escape our view.  I feel that it’s an important component of the work.

In The Prisoner, the barred window indicates captivity while the luxurious curtain tells us that this is not the same sort of austere prison seen in The Soul’s Prison House. Perhaps we can interpret the peacock feather on her sleeve as a symbol of vanity.  Is she a prisoner to her own desires? Is this a commentary on the dangers of materialism? She wears a beautiful gold bracelet on one arm, but follow the links to the opposite wrist and it becomes clear what appears to be jewelry  is, in fact, shackles.

I’ve written about The Gilded Cage before. I believe that the woman feels trapped within her gilded life when she sees an example of freedom through the window.  The window is more of a focus than the previous examples and it doesn’t exist as merely a symbol, but a catalyst. It is through the window that she sees life in action.  It is the nomadic dancers that have caught her attention. They are not as richly dressed as the married couple shown, but they are uninhibited and unabashed. A bird soars above them, a direct contrast to the caged bird seen to the right of the husband.  The caged bird is obviously singing, his little head thrown back in song. The outside bird has no time for song. He flies free, soaring on the wind. He will sing later when and where he chooses to land.

Of course, Evelyn De Morgan isn’t the only artist to use depict  windows in imprisonment.  Elizabeth Siddal’s 1854 drawing of The Lady of Shalott (above) shows the Lady looking towards the window.  The Lady of Shalott has been imprisoned within ‘four grey walls, and four grey towers’ until she dares to look out of the window, bringing the curse upon her.

In Mariana, Sir John Everett Millais shares Mariana’s isolated world.  The subject of Mariana was visited twice by Tennyson, in his 1830 poem ‘Mariana’ and again in ‘Mariana in the South’. Both poems are inspired by Shakespeare’s character Mariana fromMeasure for Measure.  Poor rejected Mariana. When her dowry was lost at sea, she was abandoned by her fiance Angelo.

Once abandoned, does she forge ahead and try to assemble a new life without Angelo in her secluded world? No. She pines. She weeps. She clasps his love letters to her bosom and pours over them repeatedly.  She gazes at her reflection and wonders what good her beauty is without him.

Millais creates a detailed and intricate window to place before a tired and sore Mariana.

“The window in the background of Mariana was taken from one in Merton Chapel, Oxford.  The ceiling of the chapel was being painted, and scaffolding was of course put up, and this Millais made use of whilst working. “–Life and Letters of Sir John Everett Millais

See The Unrequited Love of Mariana for more Pre-Raphaelite and Victorian images of Mariana.

Perhaps my favorite example of a window in art is The Death of Chatterton (below).

Beyond the window, life in the world goes on.  The seventeen-year-old poet Chatterton, however, lies dead of arsenic poisoning.  Artist Henry Wallis exhibited the work at the Royal Academy in 1856 with these lines from Christopher Marlowe’s Tragedy of Dr. Faustus inscribed on the frame: “Cut is the branch that might have grown full straight, And burned is Apollo’s laurel bough”.

I think I’ll be searching for more examples of windows in Pre-Raphaelite art and their symbolism.  Especially in the case of Evelyn De Morgan’s works, I think windows can be symbols of hope or escape.  It’s a rabbit-hole I’d like to pursue.