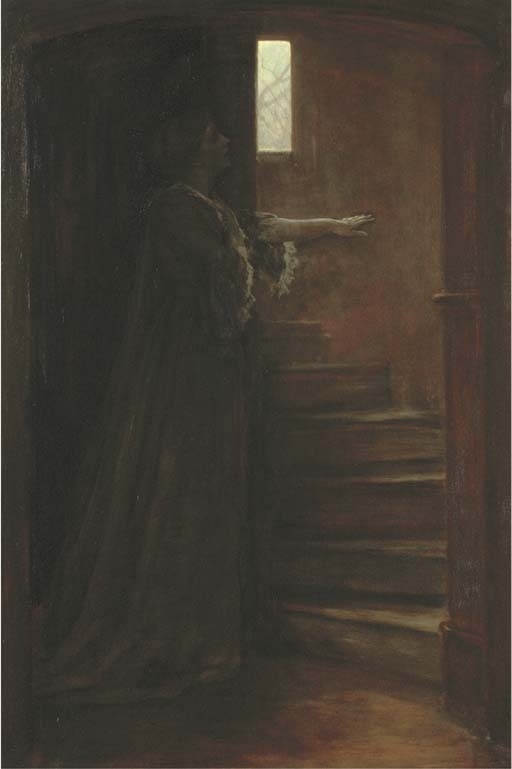 The Grey Lady (1883) is an interesting work by Millais in which we see the ghost of a murdered woman.  The staircase was taken from St. Mary’s Tower, Birnam, a building that has since been demolished but you can see photographs of it here taken in 1963.  The artist’s son described the work in The Life and Letters of Sir John Everett Millais:

In 1883 “The Grey Lady” came into being.  Some years before, it may be remembered, Millais painted one of the upper staircases at St. Mary’s Tower, Birnam, as a background for “The Princes in the Tower”, but ultimately laid the painting aside as unsuitable for his purpose.  This he now took up again, utilising it for the picture in hand.  The wraith of a murdered woman is supposed to haunt the staircase of a Highland castle, and is here seen staggering across the foreground in a tragic attitude, the subtle treatment of the subject recalling that of his earlier picture, “The Eve of St. Agnes”.  My sister Alice (Mrs. Stuart-Wortley) sat for the figure; and it really is a capital likeness of her, attenuated to the shadowy form of a ghost.

“I noticed the unfinished canvas,” says Mrs. Stuart-Wortley, “one winter’s day in his studio, and he said what a ghostly subject it would make. The same evening he asked me to sit to him, so on that and most evenings following I posed for the figure of ‘The Grey Lady’.  It is probably the only picture he painted almost entirely by the electric light.”

You can see the staircase used in The Grey Lady, although reversed, in Millais’ The Princes in the Tower.

It seems that staircase lent itself well as a backdrop for murderous tales.  The Princes in the Tower (Edward V of England and his brother, Richard of Shrewsbury) are one of history’s most famous unsolved mysteries.  Widely believed to have been murdered by their uncle Richard III, we will probably never know what happened to them.

The Grey Lady has her roots not in history, but in Millais’ own imagination.  I find her to be just as compelling as the princes, though. The way her pale, ghostly arm reaches towards the sunlight is particularly evocative.  She reaches for warmth and light as if her supernatural being longs for the natural world she is no longer a part of. She seems lost to me, as if Millais wants the viewer not to be frightened of her ghost, but to feel compassion for her.

The Grey Lady is not the only ghost story Millais painted.  In Speak! Speak! the ghost of a bride appears to her love.  He reaches out to her, urging her to speak. It’s a haunting image and the concept had been on the artist’s mind for forty years before he began to paint it.

Like his fellow Pre-Raphaelite artists, Millais took great pains to find just the right furniture and props to create Speak! Speak!  You may be familiar with the extremes he took when painting Ophelia, where model Elizabeth Siddal posed in cold water for hours and grew quite ill as a result (I wrote an article about Siddal and Ophelia in a recent issue of Shakespeare Magazine if you’re interested)  For Speak! Speak! Millais purchased an old four-poster bed and attempted to borrow an antique lamp from a museum.  Upon learning that borrowing the lamp was forbidden, the artist actually drew the object and had an iron worker create a perfect facsimile. Millais’ son remarked that from beginning to end of the work, his father took a romantic interest in the picture.

‘Speak! Speak!’ also brings to mind Wilkie Collins’ book The Woman in White. It’s one of my favorite Victorian mysteries and the author and Millais were great friends. Here Millais has created that same spectral presence of a startling woman in white. For more on The Woman in White and other paintings using the symbolism of white-clad ladies, see this post.

The Victorians excelled at  images that personify death.  Not only that, but their fascination for crime and murder gave us fiction that still delight readers to this day. ‘The Grey Lady’ is a perfect example of the Victorian obsession with the supernatural, showing us that sometimes  ghost stories are still the best stories.

2 thoughts on “The Grey Lady”