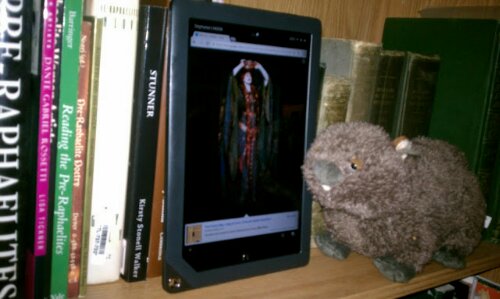 “Miss Herbert was not a remarkable actress, but her appearance was wonderful indeed. She was very tall, with pale gold hair and the spiritual, ethereal look which the aesthetic movement loved. When mother wanted to flatter me very highly, she said that I looked like Miss Herbert! Rossetti founded many of his pictures on her, and she and Mrs. “Janie” Morris were his favorite types. When any one was the object of Rossetti’s devotion, there was no extravagant length to which he would not go in demonstrating it. He bought a white bull because it had “eyes like Janie Morris,” and tethered it on the lawn of his home in Chelsea. Soon there was no lawn left—only the bull! He invited people to meet it, and heaped favors on it until it kicked everything to pieces, when he reluctantly got rid of it.

His next purchase was a white peacock, which, very soon after its arrival, disappeared under the sofa. In vain did Rossetti “shoo” it out. It refused to budge. This went on for days.

“The lovely creature won’t respond to me,” said Rossetti pathetically to a friend.

The friend dragged out the bird.

It preyed on his mind so much that he tried to repair the failure by buying some white dormice. He sat them up on tiny bamboo chairs, and they looked sweet. When the winter was over, he invited a party to meet them and congratulate them upon waking up from their long sleep.

“They are awake now,” he said, “but how quiet they are! How full of repose!”

One of the guests went to inspect the dormice more closely, and a peculiar expression came over his face. It might almost have been thought that he was holding his nose.

“Wake up, little dormice,” said Rossetti, prodding them gently with a quill pen.

“They’ll never do that,” said the guest. “They’re dead. I believe they have been dead some days!”

Do you think Rossetti gave up live stock after this? Not a bit of it. He tried armadillos and tortoises.

“How are the tortoises?” he asked his man one day, after a long spell of forgetfulness that he had any.

“Pretty well, sir, thank you…. That’s to say, sir, there ain’t no tortoises!”

The tortoises, bought to eat the beetles, had been eaten themselves. At least, the shells were found full of beetles.

And the armadillos? “The air of Chelsea don’t suit them,” said Rossetti’s servant. They had certainly left Rossetti’s house, but they had not left Chelsea. All the neighbors had dozens of them! They had burrowed, and came up smiling in houses where they were far from welcome.”–text via Project Gutenberg