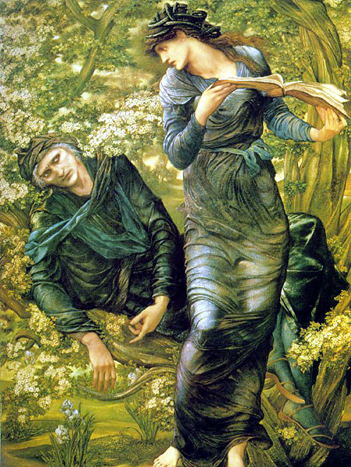 The Beguiling of Merlin is a special painting to me, as mentioned in this previous post from 2007 .

Painted by Sir Edward Coley Burne-Jones in the 1870s, this painting shares  the entrapment of Merlin.    There are many different versions of the tale of Merlin and Nimue.  Nimue is a Lady of the Lake and is also known as Vivien, Niniane and other names.   Burne-Jones portrays Merlin as he is being trapped in the hawthorne tree, beguiled there by his temptress.

This painting is more than a depiction of an Arthurian legend.  Through his work, Burne-Jones tells us an autobiographical tale of his own beguiling.  In the face of Nimue, we see Mary Zambaco, the woman who captivated Burne-Jones, despite the fact that he was married to the beautiful Georgiana.  Mary Zambaco can be seen in other Burne-Jones works as well, including the Pygmalion series that I’ve written about here.  The Beguiling of Merlin was also his way of marking the end of the affair.  Unlike Merlin, Ned had broken free from Mary’s spell.  He was disillusioned, even writing that she was “A woman at her best, self-denying and devoted , is pathetic and lovely beyond words; but once she gets the upper hand and flaunts, she’s the devil.”

The End of the Affair

Mary Zambaco can also bee seen in What is the Pre-Raphaelite Woman?