And on the liquid mirror glow’d
The clear perfection of her face,
‘Is this the form,’ she made her moan,
‘That won his praises night and morn?’ –Alfred, Lord Tennyson Mariana in the South

Like the Lady of Shalott, Mariana lives a secluded existence. The subject of Mariana was visited twice by Tennyson, in his 1830 poem ‘Mariana’ and again in ‘Mariana in the South’. Both poems are inspired by Shakespeare’s character Mariana from Measure for Measure. Poor, rejected Mariana. When her dowry was lost at sea, she was abandoned by her fiance Angelo.

Once abandoned, does she forge ahead and try to assemble a new life without Angelo in her secluded world? No. She pines. She weeps. She clasps his love letters to her bosom and pours over them repeatedly.  She gazes at her reflection and wonders what good her beauty is without him.

In Waterhouse’s painting above, he shows Mariana as she looks in the mirror. Her love letters have been dropped on the base of the mirror and the floor.

And rising, from her bosom drew
Old letters, breathing of her worth,

I would that I were dead.’ (from Mariana) 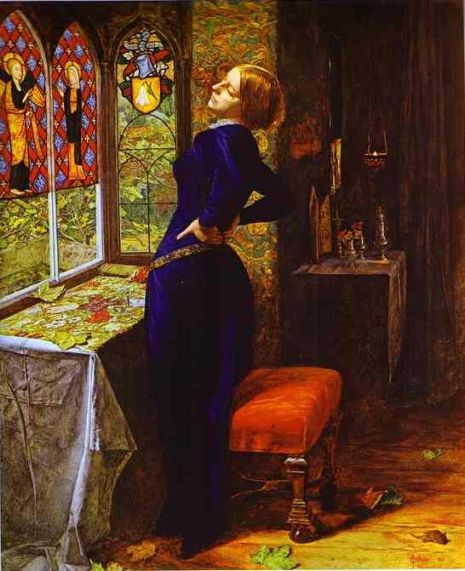 2 thoughts on “To live forgotten, and die forlorn”