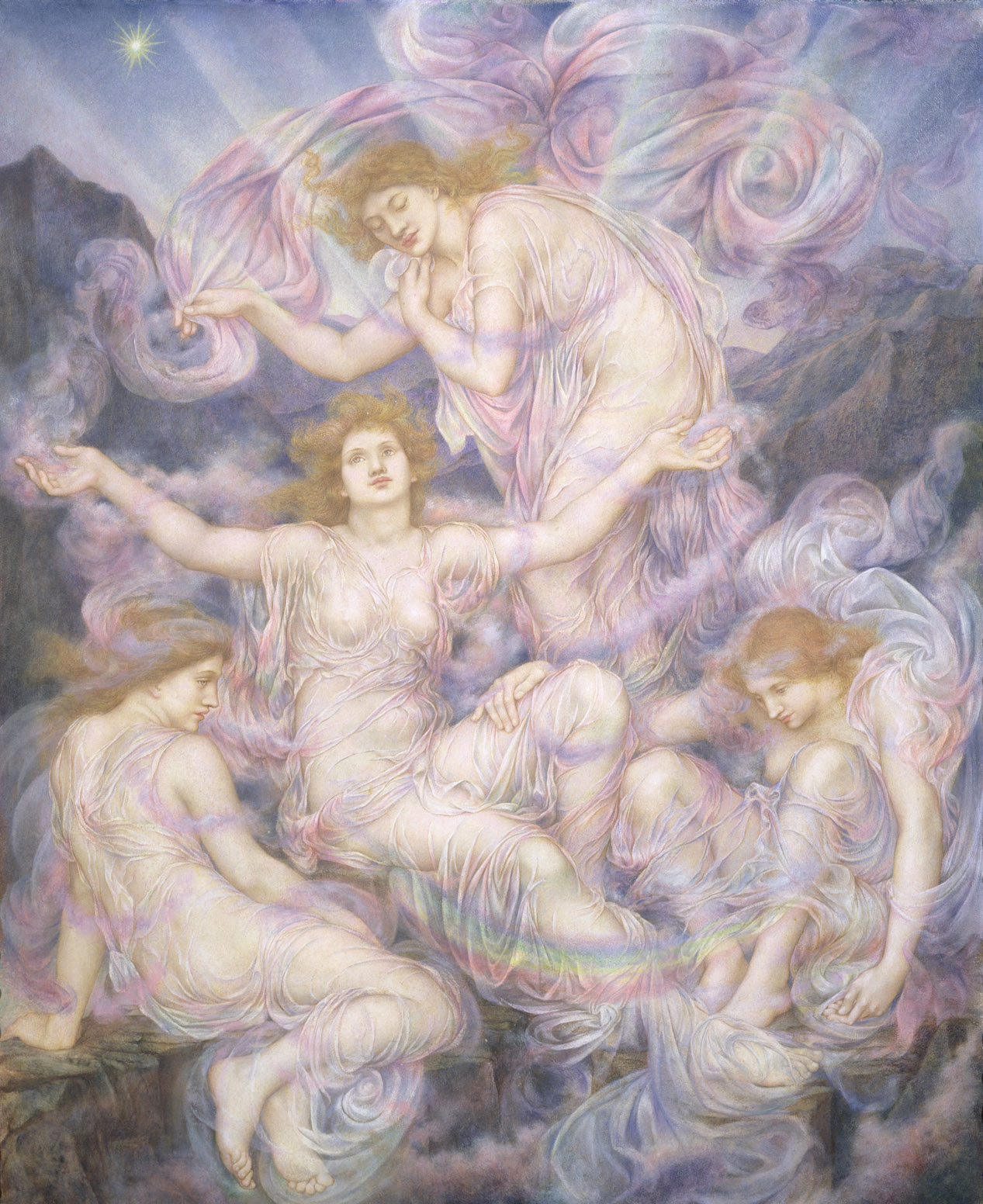 Ethereal is a good word to describe Evelyn De Morgan’s painting, Daughters of the Mist.  De Morgan depicts these airy beings with a light color palette and the hint of a rainbow gives an idea of iridescent beauty.

The De Morgan foundation states that the subject of this work is probably related to the original Little Mermaid from Hans Christian Andersen:

These Daughters of the Mist may be connected to Hans Christian Andersen’s story of the Little Mermaid. She kills herself for love, but as a mermaid, does not have an immortal soul. In the story, the daughters of the air welcome the little mermaid and tell her that if she does good deeds for 300 years, she can attain an immortal soul. The Daughters of the Mist are dressed in diaphanous draperies and sit amongst clouds and rainbows. The fourth Daughter is standing, about to stretch up to the star behind her and into the light surrounding her, suggesting that she has attained her immortal soul.–demorgan.org.uk

I love works based on fairy tales, my favorite being the scandalous story of Bluebeard, which I previously blogged about in Skeletons in the Closet.  When we think of the Little Mermaid, it is the poor mermaid herself that usually comes to mind. Tragically, she gives up her voice in order to pursue the man she desires. It is a sad fairy tale that has been lightened over the years, making it more palatable for modern parents who lean more towards Disney than the classics for their children.

Andersen’s Little Mermaid was written only a few years before his death, and seen in that light a deeper meaning can be discerned. Perhaps he was pondering mortality? For the mermaid’s quest isn’t actually for love, it’s for a soul. In order to attain one, she must marry a mortal.

The concept that mermaids have no soul and must marry to attain one goes back as far as the stories of the monster Melusina  or tales of sirens luring sailors to their death. The story of Undine, written by Friedrich de la Motte Fouqué, predates The Little Mermaid by about seventy years and touches upon the same plot: an elemental water spirit must marry a mortal in order to have a soul.

The Little Mermaid fails in marrying her mortal love. When she commits suicide because she does not want to murder him in order to return to her original body, the Daughters of Mist were there to welcome her and to offer a chance at immortality after all.  It is a resolution, but it is not the happily ever after of the Disney film.  If De Morgan’s painting is indeed inspired by Andersen’s tale, then I applaud her for choosing to depict an aspect of the story that is often overlooked.

The sun rose above the waves, and his warm rays fell on the cold foam of the little mermaid, who did not feel as if she were dying. She saw the bright sun, and all around her floated hundreds of transparent beautiful beings; she could see through them the white sails of the ship, and the red clouds in the sky; their speech was melodious, but too ethereal to be heard by mortal ears, as they were also unseen by mortal eyes. The little mermaid perceived that she had a body like theirs, and that she continued to rise higher and higher out of the foam.

Where am I?” asked she, and her voice sounded ethereal, as the voice of those who were with her; no earthly music could imitate it.

“Among the daughters of the air,” answered one of them. “A mermaid has not an immortal soul, nor can she obtain one unless she wins the love of a human being. On the power of another hangs her eternal destiny. But the daughters of the air, although they do not possess an immortal soul, can, by their good deeds, procure one for themselves. We fly to warm countries, and cool the sultry air that destroys mankind with the pestilence. We carry the perfume of the flowers to spread health and restoration. After we have striven for three hundred years to all the good in our power, we receive an immortal soul and take part in the happiness of mankind. You, poor little mermaid, have tried with your whole heart to do as we are doing; you have suffered and endured and raised yourself to the spirit-world by your good deeds; and now, by striving for three hundred years in the same way, you may obtain an immortal soul.”–The Little Mermaid, Hans Christian Andersen

I find that I have a definite attraction for female characters associated with water:  Ophelia, The Lady of the Lake, Melusina and Undine.  Water is a powerful symbol.

See my previous posts related to women of water:

Waterhouse: More on Undine and Mermaids