In my previous post about The Beloved, I mentioned the woman in the right area of the painting: 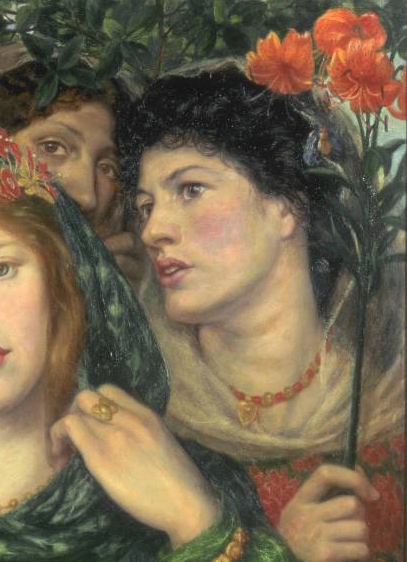 For the woman on the right, Rossetti used a model named Keomi Gray.  I’ve desperately searched for more information about her, but it’s quite difficult.  There doesn’t seem to be much written about her and if anyone has a book or a source to recommend, I would be grateful.  When I do find mentions of her, it is usually a short sentence sharing the fact that she was the lover of artist Frederick Sandys.  Why is it that I can’t seem to find a full length biography written about Sandys?  It would probably be the only way for me to find out more about the mysterious Keomi.

Most mentions of Keomi describe her as a gypsy and this is where I feel the need to confess my ignorance regarding the usage of the word.  I’ve never been quite clear as to whether or not it is an ethnic slur.  Since I am unsure, I won’t describe her as such because I don’t want to be insensitive to the culture.  I do know that Keomi was of Romani descent and living in a Roma encampment when the artist Frederick Sandys met her.  Sandys was married to Georgiana Creed; they were separated but never divorced.  So his relationship with Keomi was illicit but it seems to have been quite open.  Not only did his friends know of it, but author George Meredith put a character based on Keomi into The Adventures of Harry Richmond.

In Jan Marsh’s biography of  Dante Gabriel Rossetti, she shares an anecdote that Keomi  once stoned a raven to death simply for amusement.  I wonder if this is true or if Keomi embellished the tale for shock value.  It also seems that Keomi and Sandys were comfortable with and socialized with Rossetti and Fanny Cornforth.  This was before tensions rose between Rossetti and Sandys.  Later, there would be a rift between them when Rossetti started to believe that Sandys was creating works that were far too similar to his.

Sandys painted her several times, usually as a femme fatale:

The Vivien painting especially reminds me of Rossetti’s work, so perhaps it was not just paranoia on DGR’s part.

I long to know more of Keomi– she intrigues me.  I wonder what her life was like in the encampment and how it did or did not change after becoming model/muse/lover to an artist.

I’m also curious to know how their relationship ended.  Or, at least, I assume it ended.  Because later Sandys, although still legally married, began an affair with an actress named Mary Emma Jones (also known as Miss Clive).  Sandys and Miss Clive went on to have ten children, possibly more.

I know that Sandys remained with Miss Clive for the rest of his life and that they lived as common-law spouses.  But what of Keomi?  Did their relationship end and each moved on? Did she return to her life in the encampment?  I guess I would like to end this post as “to be continued” because I hope to eventually learn what became of her.

Editing to add:  Thank you to my friend Cathy Baker, who shared this link with me:  Keomi Gray Bonnett at Find A Grave.