Iconic Pre-Raphaelite paintings like Millias’ Ophelia, Rossetti’s Proserpine, or practically any Lady of Shalott garner a lot of attention.  (Rightly so.)  Of course, there are also several works that might not capture your eye right away when you see them in books or online, but in person they captivate you so unexpectedly and completely that walking away from them seems a Herculean feat of strength.  For me, La Bella Mano is one of those paintings.  It lives in the Delaware Art Museum and if you get a chance to visit, I suggest you jump.

Dante Gabriel Rossetti painted La Bella Mano in 1875.  When planning it, he described it as “a good-sized Titianesque subject — a girl washing her hands with two attendant Cupids”.   I grant you, an image of a girl simply washing her hands should not, on the surface, be interesting at all.  It’s all about the minute details and, of course, the color.  The colors are deliciously vivid and almost indescribable. Since art is subjective and I can’t possibly make you feel what I feel about Rossetti’s colors in La Bella Mano, I’ll share with you the details that excite me in this particular work.

A couple of years ago, I wrote a post about the home of Dante Gabriel Rossetti. If you are already familiar with Tudor House at 16 Cheyne Walk at all, you may recognize Rossetti’s bedroom.

Henry Treffry Dunn, who was at one time Rossetti’s studio assistant, gave us an intimate glimpse into the artist’s home. Rossetti moved into Tudor House at 16 Cheyne Walk (located in Chelsea) soon after the death of his wife, Elizabeth Siddal, from an overdose of Laudanum.  His years at Tudor House are often described as bohemian and his behavior did become quite eccentric.  It was in this home that he began collecting a menagerie of exotic animals and developed a passion for hoarding antique furniture, blue-and-white china, brass plates, and vast amounts of bric-a-brac. His former lover and model Fanny Cornforth became the housekeeper of Tudor House and the household also consisted of poet Algernon Charles Swinburne.

Dunn gives us a look at Rossetti’s bedroom as seen through a mirror.  His description of the bedroom sounds oppressive and claustrophobic: “I thought it a most unhealthy place to sleep in.  Thick curtains heavy with crewel work in designs of print and foliage hung closely drawn round an antiquated four-post bedstead.” In fact, Rossetti’s bedroom sounds exactly as I imagined it would, as Dunn also mentions it is cluttered and filled with ‘Chinese monstrosities in bronze’, blue china vases filled with peacock feathers, lots of shelves filled with brass repousse’ dishes and that the only modern thing in the room was a box of matches. 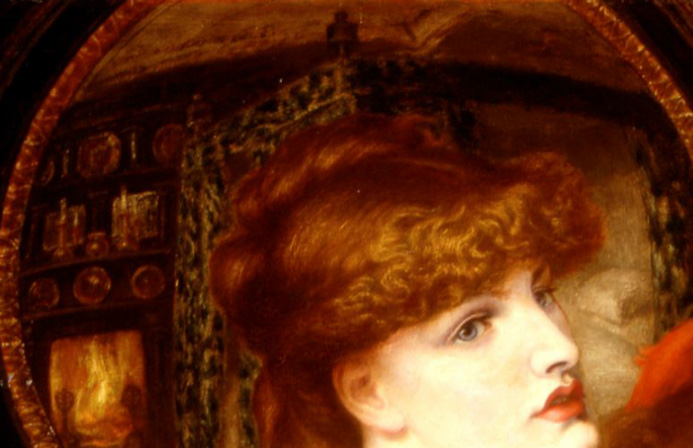 The reflected bedroom itself is interesting, since we know it it is the artist’s own room.  Even more interesting is that he seems to be using it as a narrative device.  If we look at the placement of the bed in the mirror and follow the lady’s gaze, the bed must surely be the object of her attention. The model, by the way, is Alexa Wilding.  You can find her in my post about Rossetti’s models; she is the face of his Blessed Damozel.

There is a spiral pearl hair pin that appears repeatedly in Rossetti’s later works.  I think he worked it into La Bella Mano, too. Is that it resting in the glass or vase in front of the mirror?  Here’s the pin for reference: 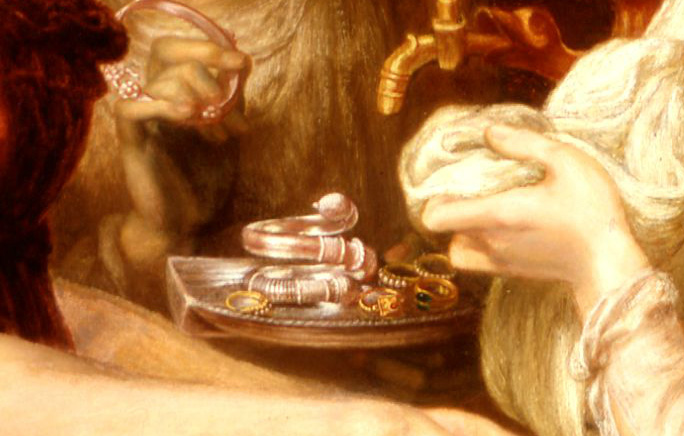 One of her winged attendants stands ready to replace her jewelry on her hands and arms after she is finished washing.  Rossetti painted her rings and bracelets with intricate detail, which is one of my favorite aspects of Pre-Raphaelite art. Nothing is a mere daub; even the smallest items are given weight and attention by the artist.  The other winged figure is ready to dry her hands.  May Morris, daughter of artist and craftsman William Morris and his wife Jane, may have modeled as the winged figures. Her mother Jane was a muse to Rossetti and appears in many of his later works. (See the posts Rossetti’s Daydream and Unconventional Beauty.) 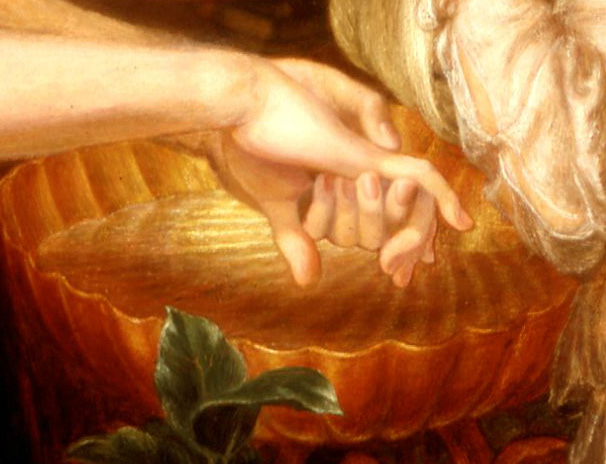 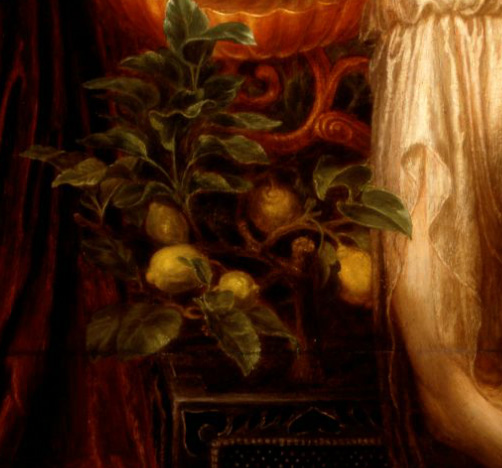 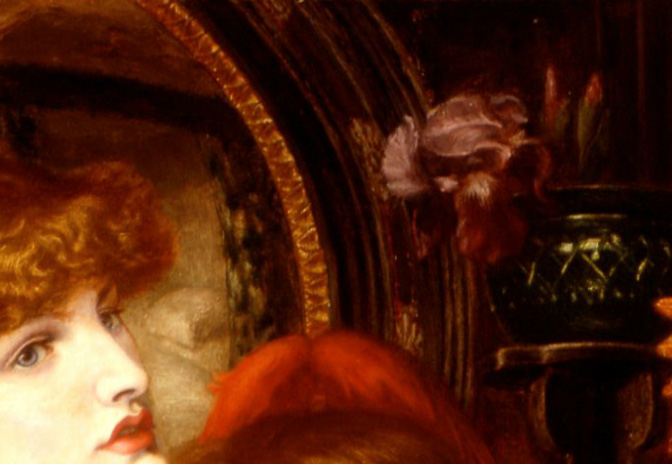 So we have a mixture of Venus and Mary symbolism, two iconic and powerful representations of different aspects of femininity.  Chaste virginity and love/desire.  Yet despite all this symbolism, an exact meaning of the work eludes me.  Is she washing her hands in an ‘I’m done with this, I wash my hands of it!’ sense?  Is this a picture of the ending of a love?  Or of a love yet to come?  Its ambiguous nature is probably why I find it appealing.  Some paintings are like a puzzle for us to tease meaning out of, never quite making all the pieces fit in an exact manner. 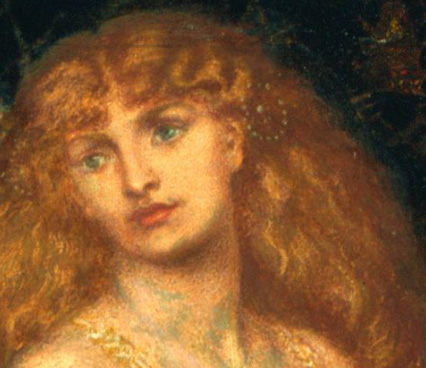 Yet again, Rossetti has used a mirror to show us that there is more going on here than a mere beauty washing her hands.   “The subject is the poisoning of her first husband Duke Alfonso of Bisceglia. You see him in the mirror, going on crutches, and walked up and down the room by Pope Alexander VI, to settle the dose of poison well into his system. Behind these figures is the bed, as they walk the room, and Lucrezia looks calmly towards them, washing her hands after mixing the poisoned wine and smiling to herself”—-The Correspondence of Dante Gabriel Rossetti (Fredeman). 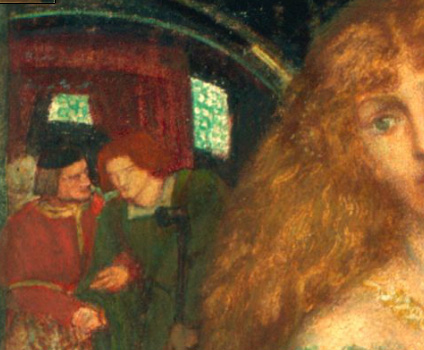 Look closely and there’s another striking similarity with La Bella Mano.  Our murderous Lucrezia has removed her rings.  They sit on the basin as she washes her hands. 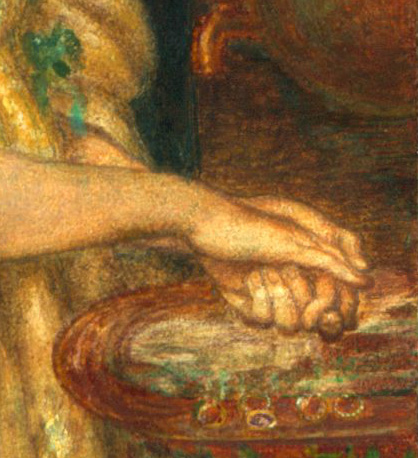 Some sort of citrus tree sits directly below her wash-basin. 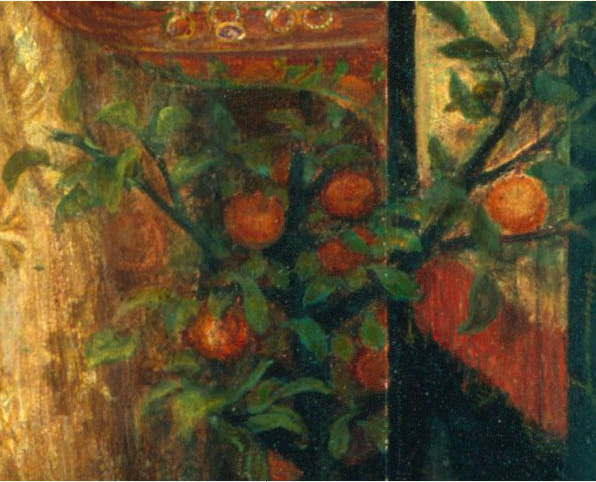 This is a painting that depicts a definite ending.  Washing her hands of it, her face tells enough of a story that small symbolic details are unnecessary.  Whatever they had, it’s over. 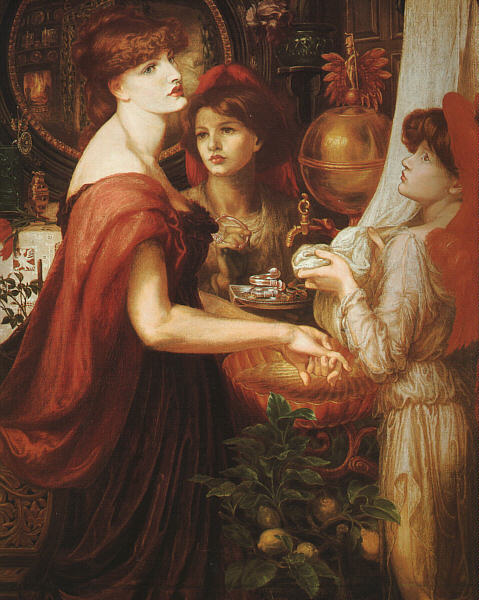 As Rossetti often did, he composed a sonnet to accompany La Bella Mano.