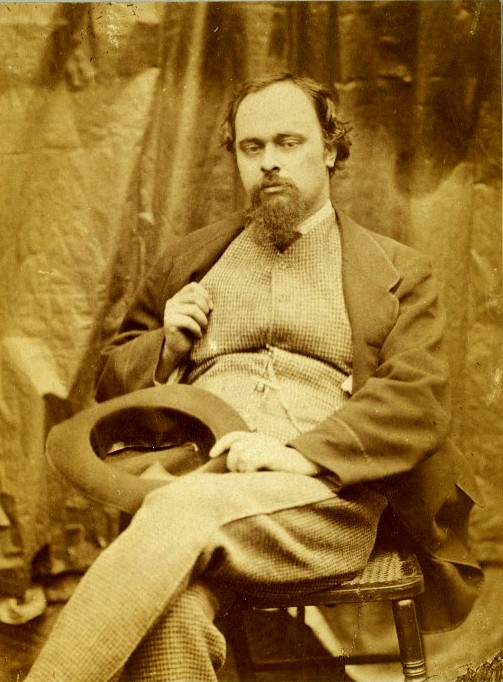 Today marks the anniversary of Rossetti’s birth in 1828.  A founding member of the Pre-Raphaelite Brotherhood, Rossetti’s works capture his unique view of beauty.  His paintings of women during the latter stage of his life are often criticized for their unusual physical attributions: elongated necks, cupid bow lips, and  languid gazes.  And, of course, all that Pre-Raphaelite hair.

Rossetti spent much of his life creating double works, meaning that he often wrote poetry to accompany his paintings.  He was a skilled and passionate poet, painting with words as vibrantly as he did with watercolors and oils.  One of my favorite examples of his double works is The Day-Dream, which I blogged about here: Rossetti’s Day Dream.

In 1860, Rossetti married his muse Elizabeth Siddal.  Their marriage has been written about extensively, often because people are so interested by the fact that he had her exhumed several years after her death in order to retrieve the poems he had buried with her.  For more posts on this site, see:  Pre-Raphaelite Marriages: Dante Gabriel Rossetti and Elizabeth Siddal and The Worst Man in London, about Charles Augustus Howell, the fellow who instigated the exhumation of Elizabeth Siddal.

In the years after Siddal’s death, Rossetti became increasingly eccentric, struggled with depression and paranoia, and was plagued with insomnia. Yet he still continued to create masterpieces of beautiful women, usually modeled by Alexa Wilding and Jane Morris.  I’ve written about Rossetti and Jane’s relationship in Forbidden Fruit.

His home at Cheyne Walk still stands today. We are lucky enough to have an idea of what it looked like during his stay there from paintings and contemporary accounts:  Exploring Rossetti’s Home.   Visits to the home by Lewis Carroll may have inspired the tea-party scene in Alice in Wonderland:  Lewis Carroll and the Pre-Raphaelites.

Rossetti was a fascinating individual. Often described as a womanizer, in studying his life I have found him to have been an incredibly generous man who encouraged the artistic work of women in a time when it was unfashionable to do so.  He obviously had some character flaws. He constantly owed his friends money, he was quite flirtatious and those dalliances no doubt added to the notions that he was unfaithful to his wife. Rumors still persist that on the night of her death, Rossetti was with Fanny Cornforth or Jane Morris. The inquest states he was at The Working Men’s College.  Whatever his flaws, his work fascinates me.  (See my post The Unique Beauty of Rossetti)

His father’s interest in Dante Alighieri’s works Vita Nuova and Divina Commedia had a lasting influence on Rossetti’s life and work: Shades of Dante.  He was also captivated by Edgar Allan Poe, as seen in Who was the Blessed Damozel?   and Ulalume. His works are also heavily influenced by mythology and the supernatural.

Birds in the works of Rossetti

The marriage of Dante Gabriel Rossetti and Elizabeth Siddal

On Rossetti’s birthday, I like to remember him according to the words of his friend, artist Sir Edward Burne-Jones:

Memorials of Burne-Jones, Vol. I, p. 149, written by Georgiana Burne-Jones:

“All the actual study of painting that Edward did with Rossetti was a few mornings’ work in his studio, but what he learnt from him was far more than painting. “He taught me to have no fear or shame of my own ideas, to design perpetually, to seek no popularity, to be altogether myself — and this in not any words I can remember, but in the tenor of his conversation always and in the spirit of everything he said. I remember that he discouraged me from study of the antique–the classical antique– giving as his reason that such study came too early in a man’s life and was apt to crush out his individuality; adding that when a man had once found his own and was much older and could front the fear of being crushed, a year or so given to much study would be an excellent thing.  So what I chiefly gained from him was not to be afraid of myself, but to do the thing that I liked most: but in those first years I never wanted to think but as he thought, and all he did and said fitted me through and through.  He never harangued or persuaded, but had a gift of saying things authoritatively and not as the Scribes, such as I had never heard in any man. ” (bold emphasis mine)